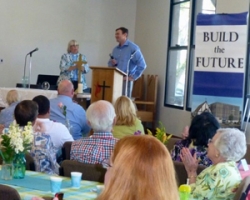 The First United Methodist Church on 10th Street is one of the very few buildings, and the only church, that celebrates its centennial the same year that Seal Beach does.

To commemorate the occasion and to do some significant building improvements, Reverend Tia Wildermuth and her congregation began working on the proposed improvements a few years ago.

Reverend Tia said,  “Thanks to some very generous gifts and also some key church members, including our former resident and planning commissioner Dave Everson who worked tirelessly with our city Planning and Building departments.”

Several major improvements were done, including a complete expansion to a commercial kitchen, a built in stage, interior flooring and finishing, ADA compliant modifications and audio visual equipment which will allow the fellowship hall to have live feed from the original chapel immediately adjacent.

The congregation was ecstatic to have such an addition and was joined in the celebration with Rev. Dr. Kathey Wilborn, district superintendent of the California- Pacific Annual Conference of the United Methodist Church.

She said,”These improvements are much needed as our congregation under Reverend Tia continues to grow.  We are so blessed in seeing growth in Seal Beach.”

Growth is a result of long-term parishioners who are committed to the town, such as Tom Blackman and his wife, who are engaged in the Friends of the Library, while Reverend Tia serves for the seventh year, and is currently the longest appointed Chamber of Commerce director and parliamentarian.

This represents the level of engagement of many church members, some who give quietly and some who lead beyond the church structure and service.

First United Methodist has also been leading an Easter Sunrise Service on the beach for decades and ministering to the homeless with small personal toiletry and food pantry bags.

It also hosts many Alcoholics Anonymous and Al-Anon meetings on a daily basis.

Kind and open to other organizations, the church also allows other organizations, notably the Seal Beach Lions Club, to stage many of their events, including the pancake breakfasts and many lunches throughout the year in their kitchen. As Reverend Tia mentioned one day, the founder of Methodism, John Wesley said, “We are all just striving for perfection.”

The church, its mission, and its place after 100 years may not be perfect, but all which are associated with it are striving to further the perfection not only of their faith, but their commitment to the organization and our town.The Centennial Committee also thanks the First United Methodist Church for their generous Silver sponsorship for the Centennial.