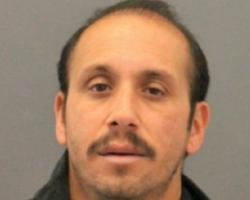 Seal Beach Police Department investigators on March 8 arrested Robert Demetro, 41, in his Alhambra home on suspicion of burglary, according to a statement issued by the SBPD.

On Feb. 25, Seal Beach police officers received a call of a theft in progress in Leisure World.  The suspect fled the location.  According to the SBPD, the suspect was then linked to a second theft in Leisure World which occurred on Feb. 19.

According to the SBPD, during the course of the investigation it was discovered that the suspect would approach Leisure World residents offering to perform services such as dent repair.  According to the SBPD, using this ruse, he would gain entry into their home and steal personal items such as credit cards.

According to the SBPD, a warrant was obtained for the suspect’s arrest and on March 8, the Seal Beach Police Special Enforcement Team and Detective Bureau served a felony arrest warrant in the City of Alhambra. According to the SBPD, during the investigation it was revealed that Demetro had been previously arrested in 2014 for the same crime by Seal Beach detectives.

Police are asking anyone with information related to this case to contact Seal Beach Police Officer Jon Ainley at 562-799-4100 Ext. 1603.

One of those sightings was reported on the 200 block of Electric Avenue, in Seal Beach’s Bridgeport area.

The other three sightings were reported on the 400 block of Purdue Circle and the 100 and 200 blocks of College Park Drive.

Car Burglary—Time of report not provided—Police received a report of a car burglary between 2 and 7 a.m., Thursday, March 1.  No further details were provided.

Disorderly Conduct: Alcohol—Time of report not provided—Balboa—Police received a report of one or more individuals engaging in disorderly conduct involving alcohol, at Balboa between 2:59 and 3 p.m.

Suspicious Circumstances— 7:06 p.m.—Paseo Bonita—The caller reported a white van moving items out of the residence. The caller said the owners had just moved out.

The caller said they individuals were three males, but provided no further description. The caller was an anonymous neighbor.

Patrol contacted the individuals, who had a work order for moving the items. Patrol attempted to contact the homeowner and was able to confirm the work order.

Suspicious Person—4:33 p.m.—Seal Beach Boulevard—The caller was a loss prevention employee at Kohl’s and had observed two individuals in the men’s department who were in possession of stacks of jeans and athletic clothing.

The individuals had not concealed anything, but were behaving similarly to those who grab and run. Each had a shopping bag full of clothes.

Another loss prevention officer outside observed an individual sitting in a black Dodge. Patrol units responded and the contacted the individuals in front of the store. They were detained.

The property was recovered, but the man may have had more items in in his jacket.

A woman left in the Mercedes and the man jumped a fence near the base. Base security was informed.

The loss was confirmed, but no prosecution sought.

Disturbance—8:58 p.m.—Katella Avenue—The caller reported a man who was getting into an altercation with customers.

The caller was a bouncer who said the man arrived at the Starting Gate intoxicated and the bouncer was  outside with him. The caller then reported that the man was lying on the ground and was too intoxicated to get up without help and the caller was not going to assist him.

A taxi was requested for the man, but one was not in the area. An Uber picked up the man.