Composted material is reportedly being shipped to the Joint Forces Training Base in Los Alamitos.

However, a spokesperson for the base said there is no composting going on at the base. Seal Beach District 2 Councilman Gary Miller said the material was compost, but it was not “green waste.”

Representatives of Seal Beach and neighboring communities learned about the activity during a Wednesday, Sept. 22 meeting with Brig. Gen. Keith Jones. The cities of Cypress Garden Grove and Los Alamitos were also represented at the meeting. The representatives included elected officials.

“To the surprise of all the cities because of odors that are again emanating, the JFTB is apparently allowing Rainbow Disposal and Agromin to bring in green waste for use on the base,” according to an e-mail from Jan Sledge, executive assistant to Seal Beach City Manager David Carmany.

Attached to the e-mail were two photographs of piles of brownish material.

Laura Herzog, a civilian public relations employee of the base, said all composting activities on the base had ceased in September 2009. She repeated that there had been no composting on the base since then.

However, she confirmed that “composted material” had been brought to the base for landscaping the grounds. She called the material mulch.

Herzog said the issue came up when she received a call from the Garden Grove city manager’s office concerning a citizen’s complaint about odor from the base.

Herzog said she gave the Garden Grove resident a tour of the base. She said they found a pile of green waste—grass clippings from the agricultural part of the base—that should have been removed, but had not been removed.

“Unfortunately, the whole catalyst for this was that green grass had not been removed,” Herzog said.

Councilman Miller said that he and the other representatives at the Sept. 22 meeting were told the same thing.

Herzog said that green materials are no longer left to produce an odor. She said if activities on the base create green waste it is not left in place for more than a day.

“At the end of the day, we’re not composting,” Herzog said.

Herzog did confirm that mulch was being brought onto the base. Herzog said mulch fights dust on the base, reduces pesticide use and reduces water use.

She also said mulch is not moved after 2 p.m.

Miller said he had been to the base and could smell the compost as soon as he got off the bus. He couldn’t say how mature the compost was. He did not, however, consider the material to be “green waste,” which he described as material in the initial stages of decomposition.

“What I saw at the base was not green waste,” Miller said.

Miller was told the composted material is being separated on the base.

Miller said he suggested having the material separated at a remote site, not on the base.

“We’re working hard to have a good relationship with the base,” Miller said.

He also said the issue of the smell needed to be addressed.

Miller phoned the Sun at approximately 7:20 a.m., Tuesday, Oct. 5, to say it was important for people to know that elected officials were looking into the matter.

•    The Sledge e-mail said residents have been concerned about helicopter noise from the base. General Jones told the representatives at the Sept. 22 meeting that the helicopters will fly higher from now on.

•    Runway repairs at the base are scheduled to begin in October and should be done by January 2011.

•    The Mayor’s Consortium is looking at ways to charge $5 a car to offset the cost of the annual Fourth of July event at the base. 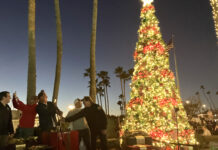