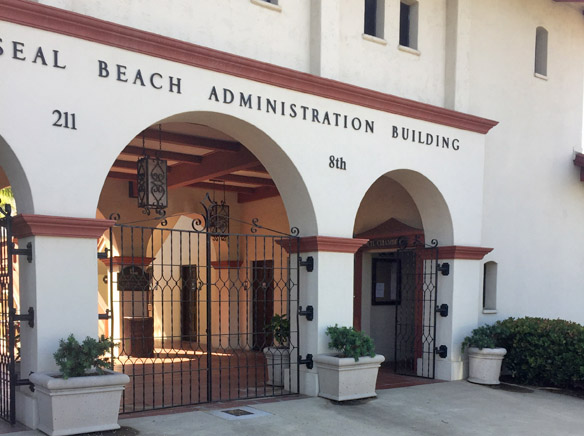 The complaint, entitled “Amanda Webber vs. City of Seal Beach, et al” was filed with California’s Department of Fair Employment and Housing. Complaints are generally a precursor to a lawsuit. The City of Seal Beach received the complaint on June 11, city records indicate.

The Sun obtained a copy of the complaint through a Public Records Act request after receiving an anonymous email tip.

According to the complaint, Ingram is accused of using “intimidation tactics” to dissuade Webber out of pursuing a complaint against Chief Miller with the city. In the complaint, the city manager is also accused of initially “failing to investigate” the sexual harassment claim.

For a five-month period, from January to May of this year, Webber alleges through detailed accounts in the document, that she was discriminated against and retaliated against for coming forward. According to Webber’s complaint, on February 12, 2018, she received a notice of investigation from the city that she was the complainant against Chief Miller and Ingram.

In mid-February, the complaint states Webber was interviewed for five hours over a period of several days by “the City’s investigator.”

According to the complaint, on May 2, 2018, Webber was informed by Assistant City Manager Patrick Gallegos “that all but one allegation on [her] complaint was deemed unfounded.”

Gallegos sent a statement to The Sun, which read, in part, “The City previously received a similar complaint and hired a neutral investigator who thoroughly investigated the matter. City policy requires a prompt and thorough investigation of each claim of harassment and the imposition of discipline if the facts of the claim are established. The City complied with that policy fully and imposed no discipline as a result of the complaint.” The statement ended with: “The City will not comment further on this personnel matter.”

Chief Miller has been with the Seal Beach Police Department for more than thirty years.

He became acting Chief in 2016 when then Chief Joe Stilinovich was placed on paid administrative leave after a formal complaint was filed against Stilinovich.

Chief Miller submitted this statement regarding Webber’s complaint: “I am focused on leading the men and women of the Seal Beach Police Department in protecting our residents, businesses, and many visitors. It is a personnel matter, and beyond that, I have no further comment.”

While the city points to the findings of the investigation, Webber’s attorney has his own opinion. “We are confident that any claims that were found to be unsubstantiated will be proven throughout the course of litigation,” wrote Nicholas T. Hart, the attorney from Freedman Boyd Hollander Goldberg Urias & Ward P.A law firm of New Mexico, who is representing Webber.

Hart said Webber was not given the results of the investigation.

“The city told Ms. Webber that they would not provide her a copy of any findings, would not identify who they talked to, and would not tell her what claims were determined to be founded and unfounded because they assert that they are prohibited from doing so,” Hart wrote in an email this week. Hart also wrote “a current city policy” is preventing Webber from speaking to The Sun.

The Department of Fair Employment and Housing stated it granted Webber a right to sue. It did not investigate Webber’s complaint and closed the case immediately, a common practice. Webber will now have one year to file a lawsuit.

Hart described being in “the early stages of litigation” and said he is teaming up with the TIMES UP Legal Defense Fund “to remedy this injustice and aggressively prosecute Ms. Webber’s claims.” The defense fund is run by the National Women’s Law Center and was established by Hollywood producers in response to the Harvey Weinstein case and the subsequent #MeToo movement.

As of Tuesday, Amanda Webber was still working as the Chief’s executive assistant.