The Christmas (and other) holiday season began this weekend with the annual Christmas Tree lighting on Saturday and the Menorah Lighting on Sunday. The event officially began at 4 p.m.

As adults and children waited for darkness to fall—awful hard to appreciate Christmas tree lights in the daylight—people posed with a snowman and children rode sleds down a “snow” slope. 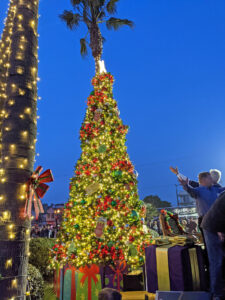 Hot chocolate and other foods were on sale (what, no mistletoe?) as the crowd gathered for the tree lighting ceremony.