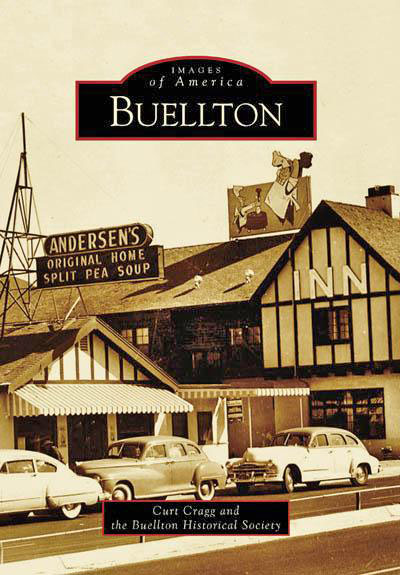 Did you know Buellton, 170 miles north of Seal Beach, off Highway 101, is where famous Andersen’s Split Pea Soup was born?

Nearly 100 years ago, the soup started gaining its fame in a small Buellton cafe on ranch land, once owned by a Vermont man who came west looking for riches in the California Gold Rush.

In 1924, France native and cook, Juliette Andersen, and her Danish husband, Anton, once a top chef at the Biltmore Hotels in New York and Los Angeles, opened Andersen’s Electrical Cafe to delighted customers along the California coastal road (now Highway 101). (Their son, Robert, and other family members, also would help the empire grow.)

People wanted to call the town in Santa Barbara County, Buell, but Oregon already had a city with that name, so it became Buellton. In 1922, the last section of the coastal highway was paved and soon, the Andersen’s cafe started servicing hungry travelers. Their original split pea soup grew in popularity as visitors told others all over about its wonderful taste.

Later billboard, newspaper and other advertising campaigns encouraged travelers to think split pea soup and roadside signage even indicated just how many miles drivers and their families were from getting to taste the iconic dish at Andersen’s. Popular cartoon pea splitters, Hap-pea and Pea-wee, were featured in advertisements.

So many customers, at what became known as Pea Soup Andersen’s, The Original Home of Split Pea Soup, asked about the ingredients that waitresses handed out cards with the recipe (although they didn’t list one key item, the ham).

There even was a legal battle when a neighboring merchant advertised his split pea soup.

The Andersen restaurant and hotel also had a gift store, wine cellar and plenty of nearby service stations to entice a stop by the thousands of travelers, driving between Northern and Southern California. Travelers still stop to enjoy the famous soup.

This wonderful book, written by Curt Cragg, the Buellton Historical Society’s archivist, explains in detail and vintage photos, how this beautiful town developed through both prosperity and hard times.

He shows how nearly every kind of gasoline was sold there. The Chester Brothers even operated three different service stations (Signal, Shell and Chevron).

Readers will enjoy learning about the various bridges that were built over the Santa Ynez River to help bring travelers through the area, the Dining Cars Cafe (once open 24 hours a day), with the Buellton Speedway behind it; Andersen’s Animal Park, owned by later proprietor Vincent Evans, honoring Ted and Pat Derby’s critters (stars in the Daniel Boone and Lassie TV Shows) and so much more.

The author does a masterful job quilting this intriguing story and giving credit where credit is due. Reportedly, over 2 million bowls of split pea soup are still enjoyed by travelers every year! In Seal Beach, Andersen’s Split Pea Soup is available at Ralph’s and Von’s.

(Chris MacDonald and his family, who have loved Andersen’s Split Pea Soup and Buellton all their lives, highly recommend visitors stop and check out all the things this picturesque city has to offer. Be sure and go upstairs, above the Pea Soup Anderson’s Restaurant, and learn about local history. Buellton even attracted the filming of portions of the famous 2004 movie, “Sideways,” which won the Academy Award for “Best Writing, Adapted Screenplay” and enhanced the careers of Paul Giamatti, Sandra Oh and others.)