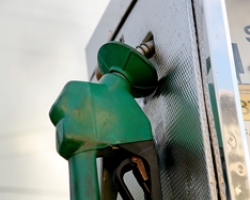 At a recent meeting, residents of the Bridgeport neighborhood in Seal Beach expressed doubts about whether ARCO will be able to clean up the contamination caused by a 2003 gas vapor leak from a neighborhood gas station.

On Wednesday evening, Dec. 17, residents raised concerns about the water table, the possibility of a methane gas build up and whether it is possible for Atlantic Richfield Company to clean up the contamination caused by leaks from the ARCO gas station at 490 Pacific Coast Highway. More than 100 people attended the second Atlantic Richfield/Bridgeport meeting in the Seal Beach Senior Center to discuss the latest developments in the ARCO station clean up.

Most of the 99 chairs that were set up prior to the meeting were full—and at least 15 people stood at the back of the room during the meeting.

At one point in the meeting, a man shouted, “You’re never going to clean it up!”

There are approximately 25 homes in the contamination zone near the gas station.

However, there are 125 homes in the neighborhood and their proximity to an area with gasoline-vapor contaminated soil could impact local property values.

Anthony Martinez, a geologist with the Orange County Health Care Agency, said soil vapor has only become an issue in the last five years.

The ARCO station has experienced gas leaks twice—once in the late 1980s and once in 2003.

Fah said ARCO would continue remediation efforts until the neighborhood was restored. He encouraged residents to allow ARCO access to take indoor samples.

In response to concerns about the water table, ARCO representatives said there was no evidence the water had been contaminated.

Both county and ARCO representatives have been asking for information about taking air samples from inside the homes of Bridgeport residents.

According to an e-mail from Brenda Castillo of British Petroleum, which owns ARCO, 13 homes were scheduled to be sampled on Dec. 17 through 18.

Larry Honeybourne, another representative of the OC Health Care Agency, said the California Cancer Registry would compare expected rates of cancer with known rates of cancer in the area to determine if residents are at risk.

However, Honeybourne warned that there were limits to the data.

The California Cancer Registry records cancer cases based on a patient’s residential address at the time of diagnosis.

Also, the sampling might be too small in the case of Bridgeport to provide useful information.

He said four homes nearest the ARCO station were the greatest concern.

In response to residents’ concerns that there might be a build up of methane gas, Fah said ARCO work crews were constantly monitoring for any indication of something that could create a risk of explosion. If something suspicious is found, work stops.

Dr. Robert Goldberg, a Bridgeport resident who  lives outside the contamination zone, said the city needed to declare the gas station a public nuisance.

Resident Dave Sutton asked if methane levels in the storm drains were being monitored.

City Engineer Ho said Seal Beach could do that.

Goldberg said he knew ARCO was trying to make things right. However, he said the only way to do that was to remove the gas station.

Official statements released by ARCO have said the company has no plans to close the gas station.

Goldberg told the Sun Newspapers that Bridgeport residents who live outside the contamination zone will have to disclose the fact they live near a toxic area when they sell their homes. Goldberg said he and other residents are worried about their property values.

Goldberg was critical of the ARCO property value protection program.

The program applies only to those homes within the contamination zone.

In related news, Seal Beach City Manager David Carmany has hired a consultant to monitor ARCO’s decontamination efforts. Carmany told the Sun Newspapers that ARCO officials had agreed to reimburse the city for the cost of hiring the consultant. Carmany expected to bring the contract for hiring the consultant to the first January meeting of the City Council. SBTV3 will broadcast a video of the meeting at 5 p.m. tonight Thursday, Dec. 24. The video will be rebroadcast daily through Dec. 30. Visit sbtv3.org for broadcast times.