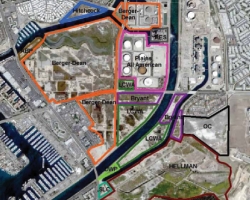 Approximately 80 people attended a meeting in Seal Beach on Thursday, Jan. 13, to discuss the future of Los Cerritos Wetlands.

“It was a good meeting,” said Mark Persico, director of Development Services.

Hellman Ranch recently sold 100 acres of the wetlands for $5.1 million to Los Cerritos Wetlands Authority, a joint powers authority that includes the cities of Seal Beach and Long Beach.

The wetlands straddle the borders of Los Angeles and Orange counties as well as the cities of Seal Beach and Long Beach.

He said there was excitement in the community now that the land is in public domain.

Persico said there seemed to be great hope among the Seal Beach residents who attended the meeting that the wetlands will eventually become a valuable community asset.

Persico said the Wetlands Authority plans to hire a consultant.

However, Persico said funding for the project is not yet certain.