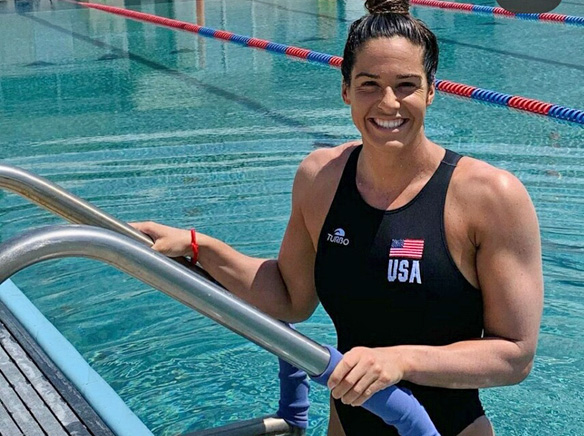 The final match was between the United States and Spain teams. The U.S. won, 14-5.

“It was a ruthless performance from Team USA, pairing suffocating defense with a clinically precise offense that succeeded in overpowering the previously undefeated Spanish squad,” according to the USA Women’s  Water Polo Team website.

“We are so proud of Rachel and her teammates for representing the USA and winning the gold medal,” wrote her Aunt Angi Biscan in an email to the Sun.

“She was competing in Water Polo Coed teams (boys with 2 girls teams) since age 10,” Biscan wrote.

“She attended Los Alamitos High School and her coaches knew then that she would be in the Olympics,” Biscan wrote.

“She attended UCLA on scholarship. Went to 2016 Brazil Olympics her junior year, where the team won gold,” Biscan wrote.

“After graduating from UCLA, she played 2 years Women’s professional Water Polo in Australia for New Castle, then back to LA in Summer 2019 to prepare for 2020 Olympics,  which were delayed till July 2021 due to COVID-19,” Biscan wrote.