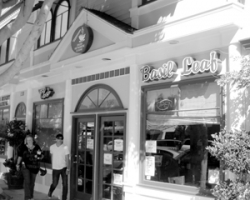 “The existing restaurant has been at their current location for almost 18 months with no known problems or complaints regarding the business operation,” said the staff report signed by Senior Planner Jerry Olivera.

“The alcohol license has been active at this location since July 2009,” Olivera wrote.

The Olivera report went on to say that the Seal Beach Police Department reported no unusual or excessive calls for service at the restaurant.

The report said the restaurant was paying off the $42,000 in lieu of parking fee under a multi-year payment agreement with Seal Beach.

The city routinely charges “in lieu” parking fees for businesses that do not meet the Zoning Code’s parking requirements.

Staff recommended granting an indefinite extension of the conditional use permit to sell alcohol, citing the fact there were no known noise or police problems connected with the restaurant.

The owners of the Chevron station at 2950 Westminster Ave. wanted an indefinite extension of a conditional use permit to operate a 24-hour service station and convenience market.

The owners also wanted to continue operating a drive-through car wash from 7 a.m. to 10 p.m. daily.

According to Olivera’s staff report, the Seal Beach Zoning Code has allowed convenience stores in gas stations since 2005.

“The convenience market is currently allowed to operate 24 hours,” the report said.

However, the store is not allowed to sell alcohol. To do that, the business owners would have to apply for another CUP.

“The car wash is currently open from 7 a.m. to 10 p.m. daily. The location of the car wash along Seal Beach Boulevard adjacent to the south side of the building provides maximum separation from the nearest residences across Westminster Avenue at Leisure World,” the report said.

The report did not mention that Leisure World is surrounded by a wall.

Capt. Tim Olson, second in command of the Seal Beach Police Department, told planning staff he had no objections to granting the permit extension.

That same night, planners approved an indefinite extension of the beer and wine permit for Primrose Café, located in the Seal Beach Village shopping center next to Leisure World.

The Planning Commission also approved plans to expand the restaurant and to keep the business open until midnight seven nights a week. Primrose Café—the banner hanging above the entrance says “Primrose Café Bar and Grille”—is in the former location of Layla’s Café.

The business is about 300 feet from Leisure World homes and faces toward Seal Beach Boulevard, according to Olivera’s staff report.

Capt. Olson told planning staff he had no reservations about the application. The applicant, Frank Tahvildari, originally requested expanding business hours to midnight at the February 2009 Planning Commission meeting. However, the request had to be postponed because proper public notice for the request had not been issued.

“The restaurant has been operating in the expanded area since February of this year without incident and, according to the applicant, has been well received by restaurant patrons,” the Olivera report said.

• A public hearing for a conditional use permit  for an outdoor dining area at the former location of Mel’s was cancelled.

It turned out the request was already allowed by right under the Municipal Code.

Century National Properties, Inc.—owners of the Shops at Rossmoor center, which is actually located in Seal Beach—announced in May that Panera Bread would open in the former Parasol Restaurant building that was last occupied by Mel’s Diner.

Panera Bread requested a permit for an outdoor seating area. Staff, initially believing the request required a conditional use permit and public hearing, scheduled the matter for the Sept. 1 Planning Commission meeting.

Panera Bread is scheduled to open in the Shops at Rossmoor later this year.

• A minor plan review of a rock waterfall feature for a swimming pool was mistakenly placed on the Planning Commission Consent Calendar.

The plan was pulled from the consent calendar for a public hearing and approved.