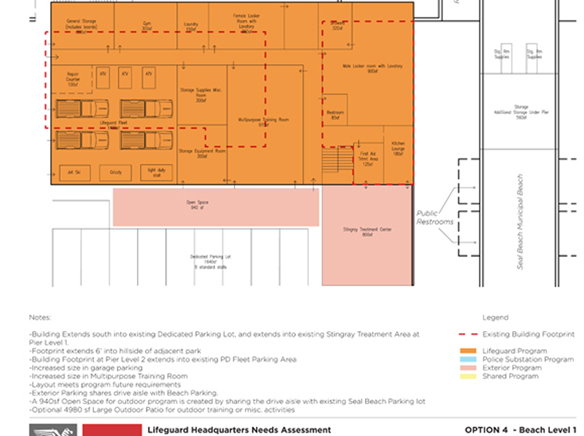 First in an occasional series on future city of Seal Beach projects.

“Based on changes in the building requirements, renovation may not be feasible/desirable, therefore a new replacement facility is anticipated to cost approximately $9.5 million,” according to the 2020-2021 city budget.

“The Lifeguard Headquarters was originally built in the 1930’s and modified in the 1960’s and 1970’s,” according to the document.

District One City Councilman Joe Kalmick said he hopes the community will have ample time to review the project and what the city can reasonably afford.

The hallway outside the administrative office sometimes serves as a changing area, according to Pierce. The lieutenant recently gave the Sun a tour of the building. He said the building was definitely put together piecemeal.

“Everything is bursting at the seams a bit,” Pierce said.

The phone system between the Lifeguard towers on the sand and the headquarters next to the pier is antique—though robust enough to endure the marine environment, according to Pierce.

Yellow paint at the threshold of every doorway provides a silent warning to watch your step. “Knock wood, we haven’t had any issues yet,” Pearce said.

“We can work with what we have, but we are going to have to update the facility in the near future,” Pierce said.

Rescue vehicles are stored bumper-to-pumper in the garage. In the same building, the gym is immediately adjacent to the kitchen.

The building has been patched up following a mold remediation project that Pierce estimated took six to seven months to complete. (That was before COVID-19.)

Pierce said a lot of the building of the headquarters was originally done by the lifeguards.

Marine Safety Chief Joe Baily said during an interview on  Tuesday, Oct. 20, that his staff do their best to best to keep the building working.

“There are some issues with this building and when you add in its age, it’s reached the end of its useful life,” Bailey said.

There are 50 employees and two toilets in the Lifeguard Headquarters and the police substation, according to both Bailey and Pierce. (Each bathroom includes a shower.)

Fans stand in the training room. (Air conditioning is available in the upstairs area.) A bed for a patient needing attention awaits along the wall, temporarily located under a utility box. It can be wheeled away from the wall to provide Lifeguards with full access to the patient.

Bailey said there is no place for the employees of the Junior Lifeguard Program.

Bailey said it was important to mention the saltwater environment. (According to Pierce, this has been a factor in keeping the old-school phone system between headquarters and the towers on the beach.)

Earlier this year, Public Works Director Steve Myrter told the council that the needs assessment for the project found the building no longer meets the needs of the Marine Safety or Police departments.

According to Myrter’s presentation, a new building would cost an estimated $9.5 million. The “conceptual cost estimate” by Griffin Structures also put the estimated cost of the so-called “option 4” at $9.5 million. (The figures in this paragraph have been rounded.)

The new building, described as “Option 4” in September, would add more than 3,000 square feet to the headquarters, according to District One Councilman Joe Kalmick.

According to Myrter, the major drawback of renovating the existing building would probably not meet the needs of the Marine Safety Department and would probably not meet regulatory requirements. (In November 2019, Myrter told the council that there would come a point when a renovation could trigger state requirements to bring the Lifeguard building up to current standards.)

Based on what he has been told by staff, Councilman Kalmick said it sounded like the building needs a major renovation or a tearing down and starting over.

“It’s of course astonishing what it costs to build a public building these days,” Kalmick said.

Even the cost of a renovating the building would not be “pocket change.”

He pointed out that the city’s infrastructure needs repair faster than the city can make the repairs.

He pointed out that paying the “prevailing wage” of workers could add 20% to labor costs.

The prevailing wage—which is greater than the minimum wage is “usually based on rates specified in collective bargaining agreements,” according to the California Department of Industrial Relations.

He said he would like to have a better understanding of what goes into the costs of things that involve a large amount of money.

Kalmick said calculating the urgency of the project is difficult.

The project wouldn’t start right away. The council has not yet given city staff direction on the project. Because of the building’s location, the project requires approval from the California Coastal Commission.