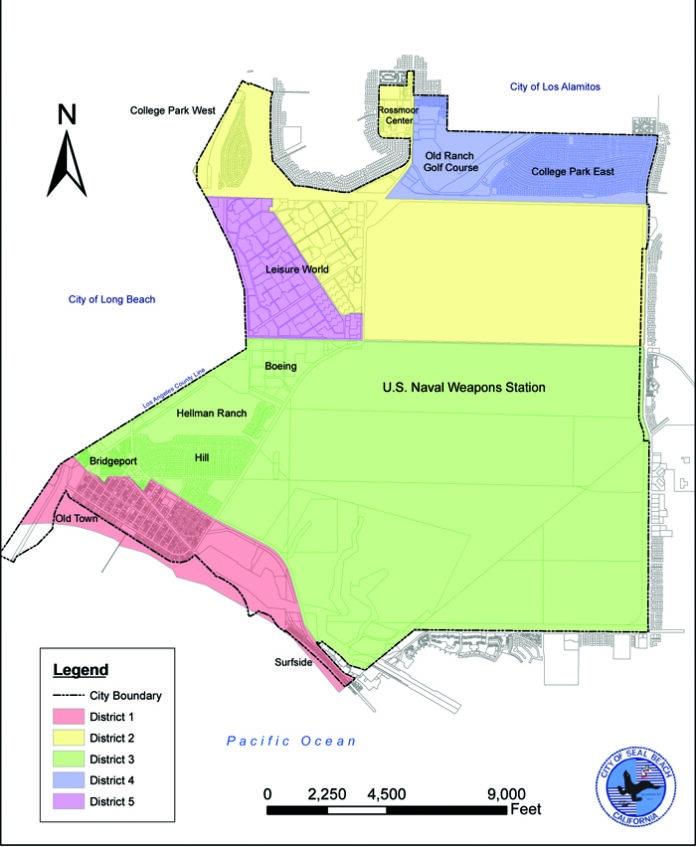 The Seal Beach City Council this week created a two-member subcommittee to determine if our town needs to redraw the boundaries of the five council districts.

“There may be some modest charge for consulting or population analysis service that is likely to be within the City Manager’s contract authority,” wrote City Attorney Craig Steele in his staff report to the council. 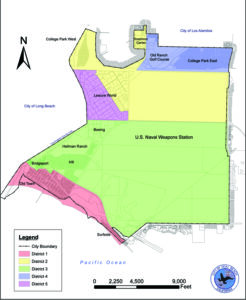 This item was originally Item S on the Monday, Dec. 13, council agenda. However, at the advice of the city attorney the item was moved to the start of the meeting.

This was the first of four public hearings on the subject of Seal Beach council district boundaries. City Attorney Craig Steele anticipated that the next meetings will be held in January and February. He called it an “ambitious” schedule. District boundaries must be determined in time for next year’s council elections. (Three seats will be in play in November 2022.)

District Five Councilwoman Sandra Massa-Lavitt volunteered to be on the council boundary subcommittee. District Four Councilwoman Schelly Sustarsic said she would also be willing to volunteer.

They will return to the council at a future date to tell the City Council whether Seal Beach district boundaries need to be changed.

No maps have been proposed yet. Local population data has not been analyzed.

Steele told the council that the city’s population did not grow very much between 2010 and 2020.

According to a recent legal notice, this was the first of four public hearings on redrawing Seal Beach’s internal council district borders. (This was not connected to the council discussion about Congressional representation.)

“After every federal Census, jurisdictions with officials elected by district must review district boundaries to ensure that the districts are still legally compliant,” wrote City Attorney Steele.

According to his report, the city attorney will be advising the city throughout the local redistricting process.

“The most basic requirement is that each district must be substantially equal in population, in order to protect the concept of ‘one person, one vote,’” Steele wrote.

“In addition, voting districts must be contiguous and geographically compact, and must protect communities of interest and their right to elect the candidates of their choice,” Steele wrote.

“At the end of a process, the City Council must re-adopt voting districts in time for the 2022 City elections,” Steele wrote.