Editor’s Note: Jeannette Andruss is a regular contributor to the Sun and is also the parent of a student at McGaugh Elementary School.

A Facebook post by J.H. McGaugh Elementary School’s Principal garnered attention from local TV news stations, sparked an online petition, and triggered dozens of comments on local social media pages, some of support, some of condemnation and some searching for common ground.

The controversy has created an opportunity for dialog, as the McGaugh community will now have a chance to discuss what all of this means for the parents, students and leaders of the Seal Beach school. The Superintendent of Los Alamitos Unified School District, Dr. Sherry Kropp, has invited families of students of McGaugh to attend a meeting on Monday, September 17 at 6:30pm in the McGaugh Auditorium.

“I want McGaugh families to have the opportunity to talk with me.  I want to listen to them.  I want to tell them what we do as a District already in terms of human relations issues, what we are planning to do in the future, and I want input from them,” Dr. Kropp wrote in an email message to The Sun.

“I’ve learned a lot through this experience on a much wider scale regarding how some of our families feel and what they experience. This ongoing conversation can help the entire district get better as the lessons can be applied moving forward,” Kropp wrote.

The post included a photo of a cut-up Nike shirt with the message that read “My newest rag! When Nike signs an anti-American thug to represent their brand, I will not support, wear, purchase, or endorse their product. Bye-bye Nike.”

Two years ago, Kaepernick began kneeling during the national anthem before National Football League games to bring attention to social and racial injustices. His protest ignited a national debate about free speech and the American flag that continues today. Kaepernick, who no longer plays in the N.F.L., narrates and is featured in the new Nike video ad and at one point says, “Believe in something. Even if it means sacrificing everything.”

Principal Ellis has made paying homage to military members, veterans and law enforcement, many who have students attending the school, a part of life on the McGaugh campus. On Tuesday, she presided over a 9/11 Remembrance ceremony where children waved American flags and heard from a former New York City Firefighter to pay tribute and commemorate the terror attacks of Sept. 11, 2001.

Her post about Nike was removed from her personal Facebook page, but a screenshot of it turned up on a petition on Change.org last Wednesday. The petition does not call for Ellis to lose her job, but it criticizes her use of the word “thug.” The petition further calls on Los Alamitos School Leaders to “lead by example” and “act civilly, treat each other with respect, and not engage in name calling.” So far more than 2,000 people have signed the petition.

Ellis issued a statement the next day, last Thursday, that read in part, “It is with a sincere heart that I apologize to the McGaugh school community for any discomfort or embarrassment I may have brought from a recent Facebook post on my personal account. It was never meant to hurt or offend anyone.”

Barbara Farrell, a grandmother from Los Alamitos, sponsored the petition and said she was asked to start it by families of McGaugh students. Farrell said they were too afraid to speak out about their feelings about the Facebook post. “She has freedom of speech,” said Farrell, referring to Ellis, and added “but I expect that she would be respectful.”

Also Thursday morning, at a regularly scheduled PTA meeting on campus, Ellis started her monthly update with tears in her eyes and apologized for the post. She offered to stay after the meeting and listen to concerned parents, which she did, alongside Assistant Principal Teri Malpass and Assistant Superintendent of LAUSD, Dr. Andrew Pulver.

At the impromptu meeting, some parents expressed worries about how the district was handling the response from the McGaugh community.

Many praised Principal Ellis for her work at the school, while at the same time criticizing her Facebook post.

One father said people were making a “mountain out of a mole hill” and were not recognizing that freedom of speech is a two-way street.

A mother teared up talking about how much she loves Principal Ellis and McGaugh Elementary.

Another mother teared up talking about how the word “thug” can be interpreted as offensive.

Some speakers expressed concern about how community members are feeling afraid.

More than one speaker noted that important lessons could be learned from the situation.

“I will reflect, I promise you that,” Ellis said after the roughly 30-minute discussion as she thanked parents for their feedback.

It was after that meeting she sent the email message to McGaugh families that included an apology that read, in part, “In reflecting on my post, there are many lessons to be learned from this experience. I regret using a word that was offensive and I apologize for any disruption this may have caused. As leaders, we are charged with maintaining a culture where we approach differences in a diplomatic, open minded, and conscientious way.”

By then, the commentary had spilled out onto the internet as Facebook and Nextdoor.com became filled with declarations on both sides. One Seal Beach Facebook page shut down comments on a post on the issue after complaints.

Steve Miller, a McGaugh parent and PTA volunteer, spoke to the media criticizing the Principal’s post and was quoted as saying “Thug is a racist comment.” But he also praised Ellis and called her “exceptional.” Miller said he received supportive and threatening messages after speaking out. One text message he found so disconcerting that he said he filed a report with the Seal Beach Police Department. (SBPD did not return requests for confirmation a report was filed.)

One Facebook commenter summed it up like this, “Pretty sure we need a special town meeting. This is horribly sad reading the division here. None of us are perfect. This makes me sad for Seal Beach. We are better than this.”

McGaugh has about 850 students. According to PublicSchoolReview.com, McGaugh’s student body is 63 percent white and 37 percent people of color, with Hispanic making up 21 percent of that figure. The McGaugh International Culture Club, a newly formed group aimed at celebrating diversity and different cultures at the school, was planning to launch an educational program on campus later this month. But, according to organizers, that is on hold now and they say the recent events have forced a discussion about the future of the club.

“These events have shifted the climate of our campus,” the parents organizers of the Club wrote in an email on Saturday. “We also fear that right now our Club activities may be misconstrued as reactionary or for some, seen as a Band-Aid for larger issues.”

Ellis has been a vocal supporter of the club and its mission.

Farrell, composer of the Change.Org petition, said families want LAUSD to “take greater accountability and provide professional development on diversity and inclusion for their teachers and school leaders.”

“Absolutely,” Dr. Kropp agreed in an email to The Sun. “We have a responsibility to be informed and to require diversity training and cultural understanding.  We are exploring many options, and many people have sent me some excellent resources.  We also do a lot already; these issues are ones that need to be constantly addressed, and people need a safe place to discuss them.  Ultimately, all of this is for our students so that they treat one another with respect, dignity, kindness, and compassion.”

Dr. Kropp said she has learned from the conversations she has had with parents in the district and encourages others to talk.

“More people need to talk with one another, listen, seek to understand, and learn from one another if we really want to make the world a better place.  We can start by constantly modeling this right here in our District,” Kropp wrote. 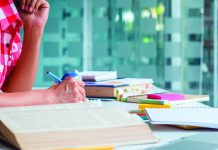