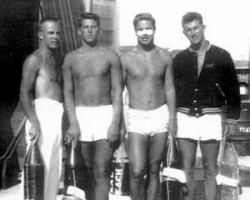 Earl Whittington was the only lifeguard in Seal Beach in the 1920s and into the early ’40s. The Seymour family lived year round in a cottage at Anaheim Landing.  During those years, most of the swimming activity was centered there. Swimmers were protected from the currents of outgoing tides by a bouy line that enclosed the swimming area. The Red Car line that ran down Electric Ave crossed by trestle over Anaheim Landing on its run to Newport Beach. By 1944 Whittington was relocated to a lifeguard station at 10th Street, equipped with a rescue dory when the navy moved in.

Andy Seymour describes the further evolution of lifeguarding in Seal Beach. From 1948 to 1950 John Wright headed the department, followed by Lloyd Murray from 1951 to 1955. In l953 Andy Seymour moved to the position of Lifeguard captain until 1983 when Tim Dorsey assumed command. Four of those summers, at the request of the city manager, Seymour also served as Recreation Director.

During the off season, Seymour was a high school teacher who concluded his teaching career as a high school principal in the Palos Verdes school district. In 1992, after retiring, Seymour returned for a second tour of duty with the city as Director of Parks, Beaches, and Recreation.