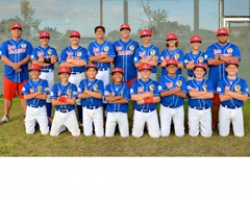 Los Alamitos Youth Baseball is proud to announce that they have again been selected to host the 2017 Pony Baseball Bronco 12 World Series. The four-day tournament hosts the top 12-year old baseball teams from Asia, Caribbean, Mexico and the United States.

The Bronco Division of PONY Baseball is the 12 year old players, the same age division as the Little League division that plays at Williamsport, Penn. every year. PONY Baseball, however is different in that the base paths and pitching distances are increased as players move into older divisions and leadoffs and pick-offs are added at earlier age divisions than in Little League.

The following players will represent Los Alamitos Youth Baseball this weekend in the World Series.

We would like to invite everyone to our Opening Ceremonies, on Thursday, Aug. 3, 2017 at 3 p.m. Tournament play will be Aug. 3, 2017 – Aug. 6, 2017. We are encouraging everyone to come out and watch some of the most talented 12 year old baseball players from around the world.

The games will be held at Los Alamitos Youth Baseball League Field.