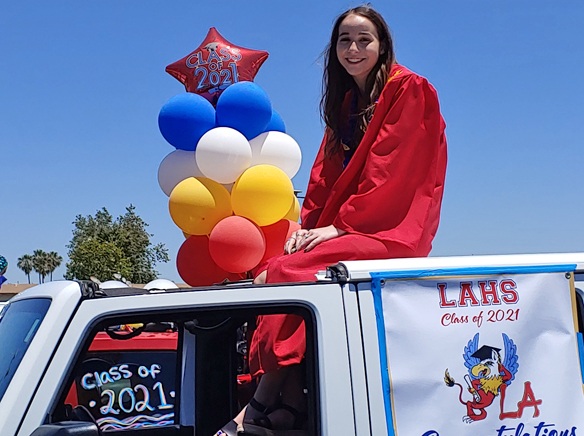 One of the largest parking lots within the Shops at Rossmoor was full this week as hundreds of students, parents, administrators, community leaders and well wishers lined up for the 2nd annual LAHS Senior Parade.

“Congratulations to the senior class of 2021,” said Jo Shade, coordinator of the event who yelled to the hundreds of assembled cars as she prepared to introduce school officials for a brief pep talk before the cars began to roll through Rossmoor.

Shade and the Rossmoor Homeowners Association had also arranged to communicate with the hundreds of cars through a special radio frequency, 88.9 for participants throughout the parking lot to monitor the proceedings.

Approximately 400 students and their families waited patiently as local law enforcement agencies lined up in front to lead the parade.

The assortment of vehicles carrying the Los Al Seniors ranged from a marine troop carrier to decorated SUV’s as the small army of transports, most decorated with balloons and various representations of school colors, nameplates and other senior favorites waited patiently for the parade to begin.

Faye Deal’s vehicle included an enlarged photo depicting her dressed in her Los Al Lacrosse uniform. Many seniors like Tenley Belshe including school colors from Los Al and their college of choice, which in her case is Northern Arizona’s Lumberjacks.

Some students even decorated their vehicles in the motif of their selected colleges, including one senior, Matthew Levy, headed to Tulane University in New Orleans whose vehicle reflected the city’s famous Mardi Gras celebration.

After a brief introduction, Shade introduced Los Al Unified District Superintendent Andrew Pulver who said, “good afternoon class of 21, we are so thrilled to be part of this amazing parade.”

“Our Los Al hearts could not be more full,” said Pulver, “it is overflowing with love, joy and pride for all of you.”

The superintendent thanked the Rossmoor Homeowners Association, whom he said had been “amazing” partners throughout out the pandemic.

“Without them, this would not be possible,” he said.

“Sometimes, when we talk about the pandemic, we focus on the negative, or the challenges it has brought about,” he told the students, but said the pandemic had also “brought among amazing new traditions.”

“If you think about it, this senior parade emerged from the pandemic. And it is something that I hope will continue to be a part of our journey and our tradition,” said Pulver.

“Sometimes when we see challenges, we see new seeds blossom. And if you could see the blossom we are seeing today, with all of you with your cars decorated, your balloons, and your graduation banners, it is inspiring and awesome,” he added.

“This is an amazing community,” said Pulver, “to live, work and go to school, and I cannot think of a better example than today, when the entire community has rallied behind you because we are so proud of you.”

His message to seniors was echoed by Board President Marlys Davidson.

“We could not be prouder of you. You’ve been through so much, but today is a celebration of who you are. You are strong, you are resilient, and I know you know how to have fun,” said Davidson.

“Every single family that steps out of their homes to cheer you on, every school that empties its classrooms to cheer for you, it’s all about love,” she told the seniors.

“It’s all about pride; it’s about being a Griffin,” the board president said.

Stone said the pandemic year has been different, yet memorable. “It’s a journey,” he said, “and I thank you for allowing me to walk this journey with you for the past year. Enough said,” Stone noted, “let the games begin.”

“Without them, we would not be here today, said Shade.