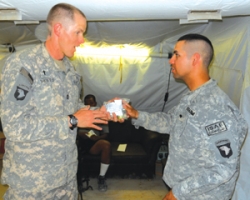 The mothers of about 15 former Los Alamitos High School band students get together at least every two months to pack boxes to support our United States military troops.

They rely on their friends and people from other community organizations of which they are members, including Jo’s Aerobic Class, Mindy’s Second Grade class and The Rossmoor-Los Alamitos Republican Women, fellow employees, students, church and neighbors to support their efforts by collecting the endless number of items needed by the Troops.

They are currently engaged in sending boxes to Chaplain Sheets who has 550 in his battalion, the hospital in Afghanistan, two Marine groups in Afghanistan and the CA National Guard in Iraq.

They have been getting together to support our troops in whatever way possible for two years.

To date they have sent 133 boxes this year. In each of the boxes of snacks or hygiene items, a note is included to thank the recipient for volunteering to serve our country and show our appreciation for their sacrifices, signed “Los Al Band Moms and Friends.”

Then the group receives a picture such as one in which Chaplain Jeff Sheets hands one of the bags to another soldier.

However, in order to continue their effort, Los Al Band Moms and Friends need donations and of course the financial support to pay for the mailing.

Anyone interested in collecting contents for packages or in making a cash donation to Los Al Moms and Friends should e-mail Jo at losalbandmoms@aol.com.