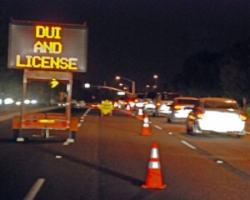 In an effort to reduce the number of deaths and injuries caused by alcohol-related car crashes, law enforcment agencies conduct DUI checkpoints to identify offenders, as well as to educate the public on the dangers of impaired driving.

A DUI checkpoint that was scheduled for Thursday, July 29, was cancelled.

A DUI checkpoint is a proven effective method for achieving this goal.

By publicizing these enforcement and education efforts, Seal Beach Police Department officials believe motorists can be deterred from drinking and driving.

Traffic volume and weather permitting, all vehicles may be checked and drivers who are under the influence of alcohol and/or drugs will be arrested.

Our objective is to send a clear message to those who are considering driving a motor vehicle after consuming alcohol and/or drugs – “Drunk Driving, Over the Limit, Under Arrest.”

The SBPD encourages the public to help keep roadways safe by calling 911 if they see a driver that might be impaired.

Funding for this operation is provided by a grant from the California Office of Traffic Safety, through the National Highway Traffic Safety Administration.

The Seal Beach Police Department is recruiting participants in its Volunteers in Police Services program.

The volunteer program has been in operation since 1997.

The department will host its Volunteer in Police Services Academy staring at 6 p.m on Thursday, Oct. 14, and will run each Thursday through Nov. 18.  The academy will be held at 911 Seal Beach Blvd. (police headquarters). Attendance at each session is mandatory.

Applications are available at police headquarters.

Applicants must pass a background screening process and obtain department approval before final selection to the program.

The 2010 National Drug Threat Survey has awarded the Seal Beach Police Department a Certificate of Appreciation. The Survey is administered by the National Drug Intelligence Center of the U.S. Department of Justice.

The NDTS 2010 addresses developments related to the trafficking and use of illegal drugs, the non-medical use of prescription drugs and the laundering of drug money.

The survey also addresses the role that criminal organizations and gangs serve in domestic drug trafficking, the significant role that the Southwest Border plays in the illicit drug trade and the societal impact of drug abuse.

NDIC analysts estimate that the overall threat posed by illicit drugs will not diminish in the near future.

The crimes listed in the Sun Newspapers were reported to Seal Beach Police Department, Los Alamitos Police Department and Orange County Sheriff Department between July 26  and  Aug.  7, 2010. Only street names are used; times given are reported times, not incident times. Crime Log entries are based on preliminary information. Space limitations make it impossible to publish every incident. Until proven guilty in a court of law, all suspects are considered innocent.

Vehicle Burglary—12:35 a.m.—Ocean Avenue—The caller said the crime occurred within the 30 minutes prior to the call to police. Point of entry: unknown, possibly a forced door. Loss: a wallet containing $120, credit cards, an iPhone and shoes. Report taken.

Tree—7:52 a.m.—10th Street—The caller said a tree branch fell on the caller’s vehicle and scratched the car. The damage was apparently on the passenger side of the vehicle. According to the log, a city tree was blocking the sidewalk. Message delivered to Public Works. Report taken.

Dog Reported Stolen—2:18 a.m.—Heron Circle—The caller believed her dog was stolen at 1 a.m. She heard the dog bark. When her husband went to check on the animal, the dog was gone and the block holding the fence closed had been moved. The dog was described as a black Labrador retriever. Report taken.

Vehicle Burglary—10:30 a.m.—Electric Avenue—According to the caller, the crime occurred on Saturday night, July 24. Loss: a handicapped placard that was apparently taken from a locked vehicle. Point of entry: unknown. Report taken.

Dead Animal—7:49 a.m.—5th Street and Electric Avenue—The caller reported a dead animal, possibly a dog, that appeared to be a coyote victim, on the west side of the street on Electric Avenue. Referred to Long Beach Animal Care Services.

Disturbance—3:33 a.m.—17th Street—The caller reported a man banging on the door, yelling profanities. He was arrested on a no bail traffic warrant out of Stockton. The Stockton Police Department agreed to pick him up. Arrested.

Illegal Peddler—1:33 p.m.—Seal Beach Boulevard—The caller said individuals were stopping everyone in front of two locations on Seal Beach Boulevard and asking them to buy movie tickets. The names and addresses of the locations were blacked out in the log. The caller expressed concern that they would take advantage of seniors. The first suspect was described as a black man in his 20s, 5 feet 9 inches, with thin build, wearing a white shirt with tie and pants. The second suspect was described as a Hispanic man in his 20s with a large build wearing a pink shirt.

Hazard—4:09 p.m.—Ocean Avenue—While on service, police unit 111 observed a light pole in the middle of a parking lot, with sparks flying from the pole onto vehicles. Handled by Southern California Edison.

Suspicious Occupied Vehicle—7:40 p.m.—Street—The caller said a man in the driver’s seat of a parked vehicle had been there for an hour and a half. Police unit 1B2 found the man reading his Bible.

Welfare Check—4:26 a.m.—Howard Street—Neighbors said a small child was yelling for her mom. The child was inside the apartment.

Officers determined that the child simply had a nightmare.

Welfare Check—12:13 a.m.—Katella Avenue and Enterprise Drive—A woman was riding a bicycle in and out of traffic. She was found, counseled and returned home.

Keep The Peace—10:06 a.m.—Oak Street—The caller needed to pick up keys from someone who bought a car fraudulently. Officers assisted.

Transient—4:18 p.m.—Katella Avenue—The caller said someone was sleeping in the patio area. Officers spoke with her and got her to leave the area.

Disturbance, Juveniles—9:43 p.m.—Los Alamitos Boulevard—Two juveniles and a transient were seen on the roof of a building with one of the individuals holding a globe. They left the scene.