When the pandemic closed down much of the workplaces, long time Seal Beach resident Francis Orlando’s graphic design worked dropped off severely. But like a lot of others, Orlando took the opportunity to fall back on his roots.

He took a break from his computer and 35-year career of creating commercial art and picked up his paint brushes and canvases. Back where he started, Orlando began putting brushes to canvas and creating art that was more meaningful to him.

The Massachusetts native relocated to Southern California in 1988. He lived in Long Beach and then Seal Beach, where he and his wife, Karen, raised two children. He’s come to love Seal Beach and the California coastal area. So when he began getting back to painting, much of his scenery centered around places like Laguna Beach, the San Francisco Bay Bridge and more recently, the Seal Beach Pier. 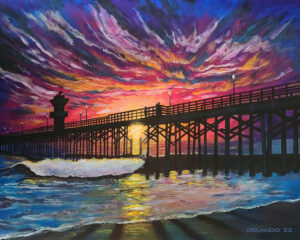 The painting of the pier came about after he began setting up his art at the base of the pier. In talking with people, he found a lot of people asking if he had any pieces that featured the pier. It’s still a favorite scene for many. He also began selling pieces and set up a store on Etsy. But he still mostly enjoys setting up at the pier, where he can interact with visitors.

As a commercial artist, he said much of his work was centered with the auto industry. Designing pieces for events and shows. While it was work he enjoyed, it said nothing about him. With paint on canvas, he’s re-discovered his own passions. Along with landscapes, such as a piece he did of Joshua Tree Park, he has painted a host of portraits of some of his favorite musicians. On his Etsy page you’ll find portraits of Bob Marley, Prince, U2 and Freddie Mercury.

He also painted a series of old-school stars for a gallery in Palm Springs. Those pieces include Marilyn Monroe and Frank Sinatra. Regardless of the subject, Orlando stays true to his love of 20th century artists like Picasso or Van Gogh. Backgrounds and skies are often vibrant with color or patterns. His Joshua Tree piece shows the desert around sunset, with pinks and oranges streaking across the sky along with clouds. It creates a vibrant orange glow on the desert floor, and rocks, as well as a scorpion, catching the last of the sunlight on a rock.

His painting of Bob Dylan offers a little more of a nod to abstract expressionism, with off colors and swirling background of light behind him. His pieces show his influences from those early artists.

“I’m drawn to that,” Orlando said.

As the world has gotten back to work, so has Orlando, going back to producing graphic art for commercial purposes. But while he still enjoys the work, he sees more the mass production aspect of those things. Stock photos and graphics make the work more about fast turnaround and production so one can move on to the next project.

But for the son of an artist and an architect, getting back to good old fashion paint and canvas is like getting back to his roots. And it’s something he said needs to be saved and nurtured in today’s computer generated art world.

“It’s almost getting to be a lost art,” Orlando said.

He can be found at Etsy.com/shop/FrancisOrlandoArt or on Facebook at Francis Orlando and Instagram at @francisorlandoart. And on occasion he will still be down at the foot of the Seal Beach Pier, where he can display his work and chat with visitors.

“One of my favorite spots is down by the pier,” Orlando said.