Sophia June won the Junior American Citizen Award from the Daughters of the American Revolution/ Susan B. Chapter in Long Beach, CA on January 17, 2022. This prestigious honor was given to Sophia for her poem, “In the Wind of Eternity” on the Tomb of the Unknown Soldier. Last year marked the 100th Anniversary of the Tomb of the Unknown Soldier and was the theme for the contest sponsored by the DAR. She received a recognition pin, certificate, and $75 prize. Her poem is advancing to the district level.

Sophia is a 7th grader at Oak Middle School in Los Alamitos. She enjoys singing, hula, ballet, and Greek folk dance. She also plays several musical instruments including ukulele, lyre, and kalimba. Sophia is a member of Scholarship Club at school and is active in the National Charity League. 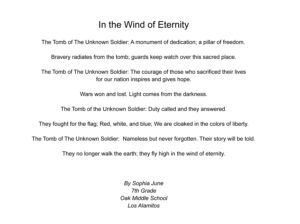