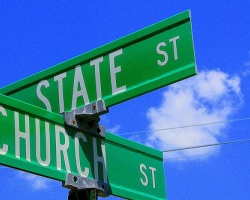 And he starts with the Pilgrims as an example.

Well let’s start by teaching about the people that established Plymouth Colony.

They were Puritans who left England under the rule of King James because of religious persecution by the majority of the minority, which they were a part of.

The core of the group that would come to be known as the Pilgrims were Puritans brought together by a common belief in the Separatist beliefs comparable to nonconforming movements in religion that violated the 1559 Act of Uniformity by two leaders, Barrowe and Greenwood.

They were executed for sedition in 1593.

I believe one has to ask how these godly people treated women, the American Indians, anyone who was “different,” etc.?

These are the same forefathers (religious Puritans) that brought us the Salem witch hunts.

If you follow their lineage they are today the same people that want to ensure that homosexuals do not have civil rights and that women do not have rights over their own bodies.

As for Judeo-Christian heritage, should we teach Jefferson’s words as FACTS? “Question with boldness even the existence of God; because, if there be one, he must more approve of the homage of reason than that of blindfolded fear.”—Thomas Jefferson.

How about “The way to see by faith is to shut the eye of reason.” —Benjamin Franklin.

Or “Lighthouses are more helpful than churches,” also from Benjamin Franklin.

I believe in our high schools we still teach the writings of Thomas Paine who wrote, “I do not believe in the creed professed by the Roman church, by the Greek church, by the Turkish church, by the Protestant church, nor by any church that I know of. My own mind is my own church.”

And who can not love the final argument of America and G-d? That of “it’s on our money, therefore we are religious” … I quote from the US Department of Treasury: “The motto IN GOD WE TRUST was placed on United States coins largely because of the increased religious sentiment existing during the Civil War.

Secretary of the Treasury Salmon P. Chase received many appeals from devout persons throughout the country, urging that the United States recognize the Deity on United States coins.

From Treasury Department records, it appears that the first such appeal came in a letter dated November 13, 1861.

It was written to Secretary Chase by Rev. M. R. Watkinson, Minister of the Gospel from Ridleyville, Pennsylvania.”

This is not a founding principle, but the rise of religion and intolerance during the Civil War.

Let’s look at that letter a bit … “This would make a beautiful coin, to which no possible citizen could object. This would relieve us from the ignominy of heathenism.

This would place us openly under the Divine protection we have personally claimed. From my hearth I have felt our national shame in disowning God as not the least of our present national disasters.”

The use of IN GOD WE TRUST has not been uninterrupted. The motto disappeared from the five-cent coin in 1883, and did not reappear until production of the Jefferson nickel began in 1938.

So, during that time were we not under his “Divine protection”?

Does Dr. Barke know that more people as a percentage of the population have been killed because of or in the name of religious intolerance than for any other cause?

9/11 wasn’t an act of terrorism; it was an act of religious intolerance. Religious fundamentalism and Puritanism in its most pure form.

I’m all for every individual having their personal faith.

But it bothers me when people like Dr. Barke want to teach any form of faith in a public school with so little understanding and so much misinformation of its history in America.

What bothers me more is that Dr. Barke is now the president of the LAUSD and he openly supports the teaching of his approved faith in our schools from that position.

Dr. Barke, we are a secular country. Our public schools are secular. It was the will and the intent of the founding fathers that it be that way.

“Believing with you that religion is a matter which lies solely between man and his god, that he owes account to none other for his faith or his worship, that the legitimate powers of government reach actions only, and not opinions, I contemplate with sovereign reverence that act of the whole American people which declared that their legislature should make no law respecting an establishment of religion, or prohibiting the free exercise thereof, thus building a wall of separation between church and state.”—Thomas Jefferson.

Our government run schools should not be teaching religion or faith in any shape or form.

Whether it is Judeo-Christian, Hindu, Buddhist, Islam, or any other belief system; whether it is one G-d or many, it doesn’t belong in our public schools.

Except maybe in High School under the course heading of Comparative Religion, in which all are taught for their good and bad points, compared and contrasted.

To do any more than that is to cross the line that separates Church and State.

One would hope that the president of the LAUSD would be, not only cognizant of that fact, but also supportive.

JM Ivler is a resident of Los Alamitos.