With tributes from the administration and their fellow board members, Los Alamitos Unified School District officially said goodbye to outgoing members Karen Russell and David Boyer, each having served four terms of four years each.

Board President Meg Cutuli did the honors of presenting the award to Russell while District Superintendent Dr. Andrew Pulver presented the award to Boyer.

Cutuli, the board’s current president, thanked Russell, who has also served as President during her tenure on the board. 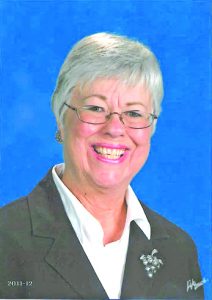 Russell, a resident of Seal Beach, is a former Teacher of the Year in Westminster, said Cutuli. “I think that sums up how Karen does anything, she does it extremely well and has high expectations for others.”

In fact, Cutuli said Russell “was at the helm” when the District hired two former superintendents, Dr. Greg Franklin and Dr. Sherry Kropp.

“After that, we were afraid to let her be President again for fear that she would want another superintendent,” Cutuli joked.

Russell championed new suspension policies and was always interested in behavioral science on the board. In fact, said Cutuli, Russell was an original member of the first Human Relations Task Force.

“For all that you have done for the kids in Los Alamitos Unified, everyone on the board appreciates your insights, your intellect, and your dedication,” said Cutuli.  Cutuli said things done by Russell have had a huge impact on the system and “we’re all extremely grateful for your actions, we will miss you.”

Board Vice President Marlys Davidson, also a former teacher, thanked Russell for her service as a teacher and a board member. “Your entire life has been about making things better on campuses,” she said.

Davidson thanked Russell for providing educational leadership “for my own children” and “all of the children of the community; thank you.”

Board member Diana Hill said when she joined the board, Russell “helped guide me in ways that I didn’t even realize I needed to be guided.” Hill also thanked the outgoing board member for being “so friendly and warm.”

She said Russell had provided key insights into “how bargaining works” and that “your legacy will live on for a very long time.”

Board member David Boyer, who began serving the same year as Russell, said she had “made me see things in a whole new perspective I’d never seen before.”

“She was always able to bring clarity to situations when they got heated,” Boyer said of Russell, who noted Russell was “always a voice of reason” and great counter point in wide ranging discussions “and I’m going to miss that.”

Pulver said Russell “reads every word” of voluminous communications and is quick to point out a spelling or punctuation error. “She would find it,” he said.

The superintendent said Russell will “always be a teacher at heart,” and was the “voice of teachers” while on the board.

More seriously, he complimented Russell on standing her ground on issues, even voting against items when she felt strongly, but always being the “consummate professional.”

Russel thanked the board for getting along so well together and for its commitment to planning.

“One of the things I’m most proud of,” said Russell, “is the fact that this board took the bull by the horns and established goals.” Russell said the board set aside a whole day each summer to sit down with a facilitator to “plan our goals for the year.”

She thanked the “phenomenal employees” of the district, and especially Pulver, for “stepping up to the plate” during such a challenging year. “This has not been easy, and we all know that.”

Both Russell and Boyer were able to cut the ribbon on the new Los Al Aquatics Center before their terms ended, having both served during the passage of multiple bond issues to vastly improve district campuses.

She agreed with Davidson saying it is helpful to have a teacher’s perspective serving on the board. “I think that does make a difference,” she said.

Pulver presented Russell with several going away gifts, including a wine and cheese cutting board, personalized for Russell, and a special necklace, made for her by Herff Jones ring company.

“It has certainly been a pleasure to serve in this school district,” said Russell.