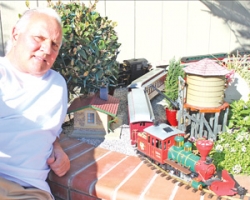 Seal Beach resident Biagio Faby, of the Bridgeport neighborhood, has lived here for about 37 years, and for 15 of those years he has assembled a train set during the holidays, which comes complete with a station, water tower, and a custom built track.

A year ago, Faby completed a custom hand-crafted Seal Beach station in eye-popping red to accompany the train set. The station even has tiny human figurines, which range from street performers asking for money to a policeman eating his lunch. Faby has the train on display throughout the holidays, and even has some trains on display that are out of service.

“I still have my first Lionel train that I ever had,” said Faby. “I started with a battery operated train and then changed to what I have now.” Faby currently has an electric-powered train as the main feature.