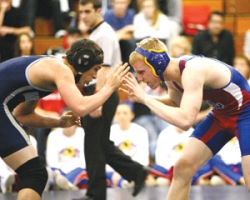 The Griffins are champs of the mat.

Coach Kenny Torres said he was proud of his squad.

“Winning the league title is a tangible result to the time and preparation of the coaching staff, parents, and athletes,” he said. “I think it will mean more to the seniors because they have seen how much work it took to have this level of success.”

Coach Torres says about Bakker, “Austin is the poster boy for how hard work and dedication correlates to success on and off the mat.”

The coaching staff and team were stunned and saddened early in the season as their beloved assistant coach, Frank Angulo, passed away suddenly.

Many of the wrestling and coaching staff have been inspired by Coach Angulo’s legacy,

which contributed to the success this team has achieved.

“He is in our thoughts all the time, before matches and during practices. The kids that were coached by him will repeat things he would say or how he would react in certain situations,” said Torres.

The Griffin coaching staff seems to be rock solid. With assistant coach Pat Cadwallader and Billy Fitzgibbons working with each player, their hard work and love of the sport transcends to each member of this “wrestling family” where success is bountiful.