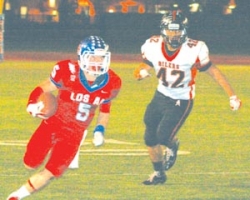 Los Alamitos started strong in their attempt to keep their playoff hopes alive. The Griffins took a lead into halftime, but in the second half, the wheels came off the wagon and the Griffins were eliminated from CIF-SS playoff contention with a 58-28 loss to Huntington Beach, in a Sunset League game on Friday at Long Beach Veteran Stadium.

The Griffins trailed 34-28 at the end of the third quarter, but the Oilers scored 10 points in less than a minute early in the fourth quarter to push their lead to 44-28 and all but seal the game. After a field goal with 10:36 left in the game, the Oilers capitalized on a fumble on the Griffins’ second play of the ensuing possession. Ramon Vargas scooped up the ball and ran 15 yards for a touchdown and a 44-28 Oiler lead.

The Griffins (5-4, 1-3) had earlier mistakes that cost them, though they had been able to rebound to keep the game close until the fourth quarter. After a punt by the Oilers was downed at the one yard line, Huntington Beach’s Zach Hadlock picked off an out pass and returned it 18 yards for a touchdown and 34-22 Oiler lead.

Mistakes that the Griffins were able to overcome earlier in the season, cost them against the Oilers.

The Griffins had two other turnovers that proved to be key mistakes, as well as a misfired halfback option pass that fooled the Oilers, but that was not completed by the Griffin offense.

They also missed on covering a pooch kick by the Oilers after a field goal that led to the Oilers taking their first lead, 27-22, early in the third quarter.

Griffin senior running back Cody Paul had broken off a 42-yard touchdown run on the Griffins’ first play of the second half. The extra point attempt failed, but the Griffins led 22-13.

The Griffins had scored first in the game after holding the Oilers to three-plays and a punt on their first possession.

The Griffins drove 64 yards on eight plays to set up a 26-yard touchdown run by quarterback Dylan Lagarde for a 7-0 lead. After holding the Oilers to three plays and punt again, the Griffins struck quickly.

Four short runs by Cody Paul set up a 55-yard touchdown pass from Lagarde to senior receiver Josh Caiquo for a 13-0 lead.

The Oilers finally got going in the second quarter with a 44-yard touchdown pass from quarterback Michael Chislock to Vargas. The Griffins had a chance to add to their 16-13 halftime lead with the ball at the Oiler six yard line with less than :30 left in the half. But after two incomplete passes their third down attempt was botched with a bad snap that ended the half with both teams scrambling for the loose ball.

Late in the third, Paul had broken off another long touchdown run, this one from 57 yards that cut the Oiler lead to 34-28, but it would get away from the Griffins from there. Paul had 153 rushing yards, the bulk of which came on touchdown runs of 57 and 42 yards. Aside from those, the Oilers kept steady pressure on the Griffin running attack.

The Griffins will see their season come to an end after Thursday’s game against Marina at Westminster High at 7 p.m.