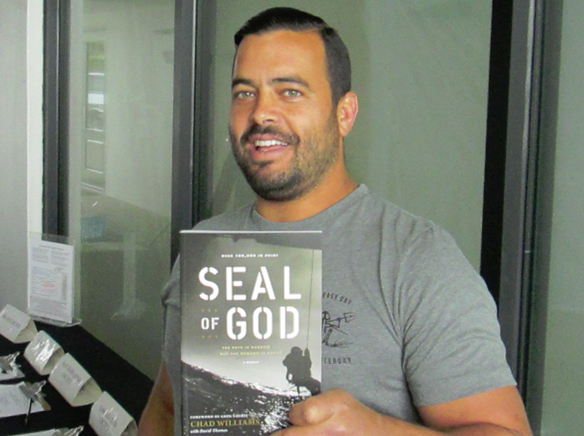 The former U.S. Navy SEAL, who was involved in some very dangerous missions overseas, is the new intern pastor at Calvary Chapel of the Harbour at Peter’s Landing in Sunset Beach. He heads up Forged, an exciting new, free program, designed for 18 to 25-year-olds from 7 to 8:30 p.m. on Thursday nights.

“He’s the right person to teach this age group using his incredible life experiences and God’s Word to navigate in the dark world today,” said Senior Pastor Joe Pedick. “As kids graduate from high school and college, many wander off from their Faith, which had been their foundation and compass in a Godly direction. A sure path to success in life is found in trusting in Jesus, who will steer them safely both through correction and the wisdom of a wise and loving Father.”

The articulate, 26-year-old veteran is right for the task having already overcome many of life’s struggles, including rebelling from teachers, picking up addictions, running from police and himself, wandering from the Lord, carrying out military operations in a 6-year stint as a SEAL in the Philippines, Saudi Arabia, Bahrain, Iraq and other places, and having the courage and wisdom to become a real Christian.

“No matter what success I achieved, I was never totally fulfilled until I accepted Jesus as my Lord and Savior and started evangelizing about him,” said the former champion skateboarder, who was in numerous commercials.

He even wrote a best-selling book, SEAL OF GOD, where he explains his struggles and triumphs, including being only one of 13 in his Navy SEAL class of 173, who graduated. SEALs jump out of planes into combat zones, conduct covert underwater operations and carry out incredible missions to ensure our freedom as well as train other country military on how to help their nations.

Williams, who recently spoke at Calvary Chapel, told how his mentor, Scott Helvenston, was brutally murdered during an ambush in Iraq. Later, Chad and his unit also were ambushed in Iraq.

“God wants to use us in our fullest capacity and he certainly is doing that with Chad,” said Pastor Pedick. “The darker the world gets, the brighter you’ll shine!”

“He’s perfect for our church—almost as if he fell out of the sky,” said Pat Carvalho, a longtime church member. “My grandson, Dezi, will love being in the class,” said Angela Cooper of Sunset Beach.

To learn more about the class, visit ccoth.com. To learn further information on Chad, who speaks throughout the country, see NavySealChadWilliams.com.