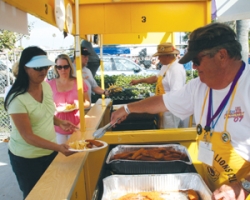 “It was a glorious weekend,” said event publicist Jackie Maloney. “It was Seal Beach in all its glory. The team effort served 30 percent more food this year than ever before.  Car raffle opportunity tickets sold out by Monday, July 12.  The earliets ever in 19 years.  The 2010 Ford Escape was won by a couple in Erie, PA.  The sister is a Lion and sold them the ticket during a phone call.  Mr. DeDad thought his sister was kidding him when she called to tell him he won the car. 2nd Prize – $1000 Home Depot gift card won by Dennis Sweeney of Huntington Beach. 3rd Prize – Queen Martinique Mattress won by Tom Fillbach.  Both Dennis and Tom were there to accept their prizes. It was hard to leave the event with so many friends and family talking and enjoying the event. Next years Fish Fry is July 16 and 17.