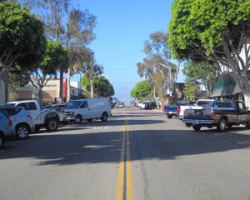 Seal Beach city officials are (figuratively) drawing a line on the sidewalk.

The city is insisting that Main Street area merchants remove unauthorized benches and displays from the sidewalks—or the city will remove them. The deadline: Monday, Aug. 9.

The city has officially warned merchants that unauthorized benches will be moved to the city yard at 1776 Adolfo Lopez Dr., where they will be stored for 30 days.

The city has issued two previous courtesy notices about benches and displays on Main Street sidewalks. The second, dated July 28, did not include a specific deadline for compliance.

“I really don’t think there will be that many benches in question,” Crumby said.

“Recently, the city of Seal Beach has received a number of complaints and city staff has observed an increasing amount of sandwich board signs, racks of clothing, tables with merchandise, tables and chairs and other items for sale on the public sidewalk in the Old Town area,” the first letter said.

“Additionally, there are also a number of unpermitted benches along Main Street and Ocean Avenue,” the letter said. Starting Aug. 10, Public Works Department staff will remove benches that are not allowed by an encroachment permit.

“A no fee permit may be obtained through the Public Works Department by submitting a memorial bench application along with a map of the bench location and details, along with proper insurance certificates,” the letter said.

At the time, Chamber of Commerce President Seth Eaker, questioned why the city was making a point of going after A-frame signs on Main Street at a time when Seal Beach was facing budget problems and other, more serious issues.

On Monday, July 12, the Sun Newspapers left voice messages with Olivera Evans and Ho, requesting information about the letter. Director of Development Services Mark Persico phoned the Sun in response to those calls.

Asked why the letter was sent now, Persico said, “One, we have a history of doing that every year at the beginning of summer.”

Persico also said that he heard from his staff that the display of merchandise on Main Street area sidewalks was “worse” this year than in previous years. Persico said Public Works had a list of the permitted benches on Main Street.

Asked who would decide what was allowed, Ho referred the Sun to Persico.

“The Zoning Ordinance only deals with uses on private property,” Persico said.

He said anything on the public right of way falls under the jurisdiction of the Public Works Department.

He said benches, bike racks and newsracks are allowed if you have a permit. Clothes racks and A-frame signs are not permitted, at least not at this time.