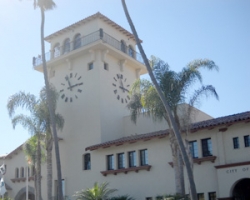 Speaking before a packed City Council Chamber, Seal Beach and Rossmoor citizens spoke for more than an hour against the proposed LA Fitness Club at the Shops at Rossmoor, despite the fact the gym was not even on the council agenda.  No one spoke in favor of the project Monday night.

The project’s potential to aggravate traffic congestion and increase crime were the main concerns raised by opponents of the proposed 37,000 square foot health club, which would be located behind the Sprouts store in the Shops at Rossmoor (which is actually in the City of Seal Beach.)

One man argued that the number of parking spaces allotted to the proposed gym would be inadequate, pointing out that the parking spaces at the nearby 24 Hour Fitness club in Los Alamitos are full during peak hours. Another man recited a Google-generated list of news stories about crimes associated with LA Fitness clubs.

Kevin Pearce, of the Coalition Against LA Fitness Project, said the consultant that created the Draft Environmental Impact Report drew the numbers for its traffic study from a book that is used for projects all over the United States and not fitting for our already-crowded streets.

Last week, the Seal Beach Environmental Quality Control Board took comments from the public on the draft environmental report for the proposed gym. The agenda package for that meeting included 50 letters and emails from supporters of the project and 15 from opponents. LA Fitness and opponents of the project have both set up websites. Opponents have gathered 195 signatures on an online petition against the project.

Because the project was not on Monday night’s agenda, the council did not comment on the speakers or the issue.

The council voted 4-1 to approve hiring Anderson Penna Partners, Inc., to provide Seal Beach with a temporary code enforecment officer. The position has been vacant for approximately two months.  Seal Beach would pay $60 an hour plus mileage for the code enforcement temp, with a $40,000 cap on the service. According to the staff report, the code enforcement officer would work an average of three days a week for six months.

Councilman Tom Moore cast the dissenting vote. Moore said he did not see the value of hiring the consultant. Moore said he would prefer to hire a full time employee.

However, Councilwoman Ellery Deaton said the city had hired two people recently and they hadn’t worked out. “A code enforcement officer is important to us to ensure the laws we put on the books are enforced and not just sitting there as laws that cannot be enforced,” she said. Deaton added that code enforcement varies depending on the area of the city. ”In Old Town, people turn garages into bedrooms. In College Park East and West, there are RV parking issues,” Deaton said.