Film maker David Wall will say that, by industry standards, his movie “Gold Dust”, was basically shot on no budget. While there was some funding, Wall and his team pulled the movie together on a shoestring and a dream.

Making movies has been Wall’s passion his entire adult life and his friend of 32 years, David Wysocki have now pulled off two released movies. Both men are connected to Seal Beach. Wall lives in Seal Beach part time, while Wysocki is a resident and electrician, who owns his own local electrical business.

Both have worked in film and television, Wysocki worked in daytime television in his younger days. However, when Wall, who wrote and directed “Gold Dust”, has led movie projects, he has looked to bring Wysocki into the project.

“His leadership is excellent,” Wysocki said of Wall.

Wall and Wysocki play the lead characters in “Gold Dust”, which centers on Fink (Wall) and Moses (Wysocki). The two characters are long-time friends and treasure hunters, whose current quest is to find a lost ship that is buried in an ancient dry lakebed. The relationship of the two men is the focal point of the story and the familiarity between the two actors helps in how the two characters play off each other.

While out on a hunt for the lost ship and its gold dust cargo, the two characters come across a scene with a dead body (Santa) and an abandoned small light plane. They also find a bag of cash, which Fink wants to take, despite Moses’ desire to leave it and just get away from the scene, as it seems obvious that something evil has taken place.

This of course leads Moses and Fink into the cross hairs of the drug dealers who are looking for their lost money. Along the way, they find a girl (Maggie) wandering the desert and other teenagers, armed and riding motorcycles, who are on their tails. Moreover, the two characters find the journey begins to change their perspectives on life and what is important.

The story, while at times has a dark underbelly, also provides some comedy. Wall said that in writing the script, he wanted to build it as an adventure comedy. It was an idea he thought of while he was out in the high desert, where he liked to go to get away and think.

“I was trying to make a ‘Looney Tunes’ meets ‘Mad Max’,” Wall said.

The movie has garnered some high praise by viewers who have rented it through Amazon Prime streaming, as well as some low scores. The movie does not have enough reviews to garner a score on Rotten Tomatoes yet, but there are three reviews from indie film reviewers and two of those found the film entertaining.

Bobby LePire, of filmthreat.com, wrote, “Gold Dust suffers from a case of tonal whiplash for about half its runtime. But, thanks to witty dialogue, a story overflowing with creativity, and excellent turns by the entire cast, the movie entrances the viewer. Add in the visual flair and amazing music, and you are left with a gem of a film worth hunting down.”

The visual flair LePire refers to, is likely the cinematography which was done by Egor Povolotskiy and includes some magnificent shots of the desert landscape and sky. Most of the movie was shot out in the desert, which presented a lot of challenges. Aside from location and keeping the cast and crew comfortable, they had the challenge of shooting outdoor night scenes, which Wall said requires equipment they could not afford.

The answer was what he said is called, “shooting day for night.” They had to shoot night scenes during the day and use camera adjustments and some special effects to make the final product look like it was shot in the desert darkness. And it works well in the film.

“We were really proud of that,” Wall said.

While scouting the desert for locations, Wall found a ranch, whose owners allowed them to park trailers on their land. From there they were able to set up a shooting schedule and get all the cast and crew set up. The entire filming was done in 28 days, in the high desert above Apple Valley, California in 2017.

“It was a phenomenal experience,” Wall said. 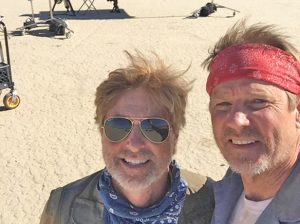 One of the forces in Fink’s back story is a high school crush he has never gotten over (she doesn’t even know he still exists). It becomes a pivot point in Fink’s motivation and is also a part of his later realization that he’s been missing the point of his life along the way.

“I really needed to crush everything he hoped and believed in,” Wall said of Fink.

The relationship between Fink and Moses remains the centerpiece, as the two interact. Moses likes to press Fink with the game “would you rather?” This offers some of the funnier moments of the movie, like when he can’t accept Fink’s answer to the question, “would you rather be the smartest pig the world, or the dumbest dolphin?”

Part of the goal, Wall said, was to make a film that families could watch together. While the film required some violence, the gun play and other violence were somewhat muted. The film is rated for ages 15 and older by CommonSenseMedia.org.

Indie film reviewer Rich Cline of shadowsonthewall.co.uk gave the film a two-star rating, noting the conflict of the comedic attempts among the backdrop of drug smuggling and child abduction. But he acknowledged the like-ability of the movie.

“As a director, Wall creates an amusing comical atmosphere (with key help from cinematographer Egor Povolotskiy and composer Jessy Ribordy), with impressive visuals and a goofy sense of haplessness, but no menace whatsoever,” Cline wrote.

Fink and Moses eventually reach the conclusion of their journey, but other characters still have more story to tell. The story of the teens on bikes and Maggie is unfinished and Wall said his intent was to leave open the possibility to continue their story in a future film.

“As and indie film maker, you kind of keep looking for whatever door will open,” Wall said.

This was Wall’s third film. His first, produced in the ‘90s, was entitled “Joe and Joe”, and also starred Wysocki. Wall produced and directed a film entitled, “Noelle,” which was released in 2018. If the “Gold Dust” saga does continue and there is a part for Moses, Wysocki said he would be happy to go back on the hunt with his longtime friend.

“To me, that’s the treasure, being able to make a movie with your best friend,” Wysocki said.