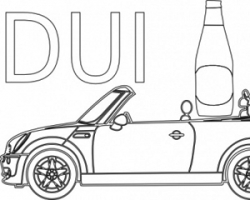 According to the DA’s office, the accused had a blood alcohol level of .24 percent, three times the legal limit.

According to the DA’s Office, he was arraigned Tuesday morning, May 2.

John David Hines, 38, of Huntington Beach, is charged with one felony count each of driving under the influence of alcohol causing bodily injury, driving with a blood alcohol .08 percent or more causing injury, hit and run with injury, and sentencing enhancements and allegations for causing great bodily injury and having a blood alcohol level over .20 percent.

If convicted, Hines faces a maximum sentence of six years and eight months in state prison. His arraignment date is to be determined.

At about 1:20 p.m. on April 1, 2011, a driver swerved into a bike lane. The driver struck bicyclist Jeffrey Gordon, 47 on Westminster Avenue.

According to the DA’s office, the victim was thrown from his bike over 70 feet and landed on the shoulder of the road.

The driver of the motor vehicle apparently kept on driving.

Two separate drivers who witnessed the crash followed the defendant to a residence and called 911.

The Huntington Beach and Seal Beach police went to the house and arrested Hines.

As for the victim, Gordon was transported to Long Beach Memorial Medical Center to be treated for head trauma, severe lacerations and bruising to his head and body, internal injuries, and spinal and vertebrae injuries.

Gordon remained in the hospital for two weeks and continues to suffer limited physical mobility as well as speech and memory loss.

The following information was provided by the city of Seal Beach Marine Safety (Lifeguard) Department for the week ending Friday, April 29.

Because of unusually large spring break crowds, the Lifeguard Department increased staff levels, Bailey wrote. Wednesday, April 27 was especially busy. Four lifeguard towers were open, two on each side of the beach.

“Currently in the Southern California area, an abundance of sea lions have been coming to the beaches, many of them dead or dying,” Bailey wrote.

“This is due to a natural poison in the water that causes extensive brain damage.  Seal Beach has had three animals come up this past week and we anticipate more in the near future,” Bailey wrote.

“Residents are warned to stay away from the animals as they are sick and can become aggressive if approached.  If anybody sees one of these animals on the beach, they should contact the Lifeguard Department and/or Animal Control,” Bailey wrote.

“Related to the above story we had a dead dolphin wash up in Surfside last Tuesday.  The culprit is assumed to be the above mentioned algae bloom that causes domoic acid poisoning in marine animals,” Bailey wrote.

The crime apparently occurred between 10 p.m., Sunday, April 17 and the time of the call to police.

Transient—9:06 a.m.—Neptune Avenue and Seal Way—The caller said a transient had set up camp on the beach for the past three days.

The camp was on the beach, off Neptune Avenue, along the ice plants.

Police contacted an individual on the dunes along the fence line.

The individual was advised to leave and told police he would comply.

Animal Information—7:44 a.m.—A Row, Surfside Colony—The caller reported a sea lion or seal on the sand, possibly injured or ill, near the playground. Lifeguard personnel told police that the animal would be left on the beach for the time being.

Battery—10:29 a.m.—Neptune Avenue and Ocean Avenue—The caller reported being punched in the face following a dispute over dogs. The suspect was a Seal Beach resident. The suspect’s dog was in a yard, the caller’s dog on a leash. The caller declined medics for an apparent bloody nose. Police detained both individuals and interviewed them in the field. Police determined it was a case of mutual disturbing the peace over dogs.

The dog had a collar. Message delivered to Long Beach Animal Care Services.

Transient—2:46 p.m.—Pacific Coast Highway—The caller said two transients, a man and a woman, were sleeping on the sidewalk on the side of the building off 12th Street. They were gone by the time police arrived.

Grand Theft—3:53 p.m.—Pacific Coast Highway—Someone stole two bicycles parked at the entrance. Both bikes were locked. Together, the stolen gray beach cruisers were valued at $1,000.

Suspicious Occupied Vehicle—10:58 a.m.—Seal Beach Boulevard—The caller said the man in the vehicle kept trying to talk to the caller and other employees. The suspicious man and the vehicle were gone by the time police arrived.

Disturbance, Juveniles—2:21 p.m.—Ocean Avenue—The caller attempted to contact the parents of juveniles at the location who were throwing water balloons at people and vehicles that were passing by. However, the parents were not answering the door.

Coyote—9:09 p.m.—Avalon Drive—Police unit 207 while on duty observed a coyote.

The sighting was referred to Long Beach Animal Care Services.

Coyote—11:35 a.m.—Heather Street—The caller reported a coyote in the park. There were no human beings in the park. Message delivered to Long Beach Animal Care Services.

Robbery—1:47 p.m.—Farquhar Avenue—A mugger approached the victim from behind in the carport area and put his hand over the victim’s mouth before demanding the victim’s jewelry. He left on foot, running towards Katella Avenue. No weapons seen. The mugger was described as a black male in his 20s, average build, medium to tall in height, wearing a backwards baseball cap, dark T-shirt and jeans. He spoke with an accent of unknown origin. A suspect was detained at Farquhar and Reagan. The victim was taken to the location for a field show-up. Negative identification on the individual.

The caller was advised that the incident was a civil issue. The child was okay, with minor scratches on the upper right arm. Long Beach Animal Care Services was en route.

Structure Fire—5:32 p.m.—Farquhar Avenue—The caller thought her neighbor’s house was on fire. An alarm was blaring and the caller could see smoke coming from the rear. The responding officer found a pot on the stove that was burning.

Transient—10:37 a.m.—Los Alamitos Boulevard—A man was going in and out of businesses, yelling at customers. He was last seen in the parking lot. Police located someone matching the man’s description at Sausalito Street and Chestnut Street. He advised to discontinue his behavior and told police he would comply.

Check Area—4:08 p.m.—Katella Avenue—The caller said that a female at the bus stop wearing a pink sweater or pink skirt was in possession of heroin, then hung up.

Police found the woman in question on Bloomfield Street near Farquhar Avenue. According to Los Alamitos Capt. Bruce McAlpine, officers observed physical symptoms that indicated the woman might be under the influence of an opiate.

She was arrested for possession of 0.6 of a gram (slightly more than half a gram) of heroin.

Vandalism—2:04 p.m.—Denwood Avenue—The stained glass panels were broken out of the front door to a residence. The caller was afraid that someone could enter residence if the panels break any more.

The responding officer found stained glass damaged on right side of double-entry front door. The caller agreed to contact the homeowners and see if a neighbor could board up the window until they returned.

Bike Stop—1:30 a.m.—Los Alamitos Boulevard and Bradbury Road—The rider was given a field sobriety test and released at the scene.

Burglary Report—6:06 a.m.—Martha Ann Drive—The caller had to leave for work and promised to call later.

Vandalism Report—6:56 p.m.—Baskerville Road—Victim reported her vehicle had been vandalized. No details were available.

Suspicious Person or Circumstances—8:02 p.m.—Bostonian Drive—A caller asked for deputies to check for a man who was “shuffling” as he walked on the sidewalk and “looked like he needed help.” A sheriff’s unit checked the area, but was unable to locate the man.

Suspicious Person in Vehicle—11:33 p.m.—Yellowtail Drive—A man and a woman were detained. The deputy found nothing suspicious.

Disturbance, Mechanical—8:35 a.m.—Quail Run Road—This was the second response to a noise complaint. The deputy heard no noise on arrival.

Suspicious Person or Circumstances—8:19 p.m.—22nd Street—The caller reported windsurfing  equipment left out on the street.  A deputy contacted the owner of the equipment.  The deputy fund nothing suspicious.

Defrauding an Innkeeper—1:45 a.m.—Bayview Drive and Broadway—A cab driver said two customers refused to pay their fare. The customers returned to the cab and paid their fare. No report needed.