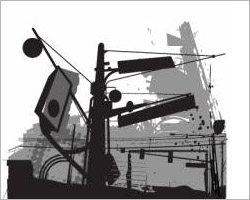 A car struck a pedestrian in Seal Beach on Tuesday night, Sept. 20. The collision apparently occurred on Pacific Coast Highway, north of Anderson Street, at about 7:35 p.m.

The pedestrian, a 64-year-old man, was taken to Long Beach Memorial Hospital and is expected to recover.

The Seal Beach Police determined that the driver was not drinking at the time, according to a statement issued by Sgt. Steve Bowles.

The driver was interviewed and released.

According to Bowles, several witnesses said the man  was attempting to cross PCH outside of a sidewalk or controlled intersection when he was hit.

Orange County Fire Authority paramedics treated the 64-year-old man at the scene and took him to Memorial.

The Seal Beach Police Department has asked that anyone who witnessed the collision call Traffic Investigator Joe Garcia at (562) 799-4100, extension 1649.

Animal Noise—12:22 a.m.—13th Street—The caller complained about a barking dog. The caller did not know if the owners were home. Police unit 207 left a note for the homeowners about the dog.

Municipal Code—1:47 a.m.—Coastline Drive—The caller complained about what the caller described as an on-going problem: a neighbor’s sensor light shined directly at the caller’s residence. The caller also said there was a motor home parked in front of the location and the caller did not believe it had a permit. Police unit 207 issued a parking citation. The sensor light was reported off at 2:07 a.m., according to the log.

Suspicious Occupied Vehicle—4:19 a.m.—Marlin Avenue—The caller said a man in a sedan was driving slowly. The man was using a flashlight. The man got out of the sedan several times, possibly searching for something Police unit 207 determined that the suspect was a newspaper delivery man.

Petty Theft Report—11:46 a.m.—7th Street—The caller’s credit cards were taken out of an unlocked vehicle between noon, Monday, Sept. 12 and the time of the call to police.

Possible Scam—11:51 a.m.—Old Ranch Road—A citizen received a call telling her that her grandson was in jail and needed to be bailed out. The caller took directions on how to send the money, but did not actually send the money. However, she did give them her address. Counseled about identity theft.

Juveniles—6:13 p.m.—Pacific Coast Highway—The caller said five or six boys were skateboarding in the parking lot. The caller wanted them to leave.

Disturbance—8:40 p.m.—Pacific Coast Highway—The caller reported a woman sleeping under a table in the seating area in front of the store. Police unit 207 arrested her for public drunkenness.

Found Property—9:34 a.m.—1st Street—The caller found a key card on her front door step. She said it looked liked  it had scratches on the back. The caller said she believed someone might have used the card to try to unlock her front door. Counseled.

Welfare Check—3:44 p.m.—Seal Beach Boulevard—The caller said a woman dressed in black was lying behind shrubbery. Police unit 106 determined that the woman was just waiting for a friend. She was not hidden in the bushes. She was just lying on the grass.

Animal Information—3:04 p.m.—14th Street—The caller requested a patrol check for a German Shepherd in a front yard. The caller said the dog was barking and lunging over the fence at passersby. Police advised the resident about leaving a dog unattended in the front yard. Counseled.

Keep the Peace—6:53 p.m.—Coastline Drive—The caller was trying to clean muddy tools in his driveway and wanted the neighbors to move their vehicle. They refused. Counseled.

Suspicious Person—10:32 a.m.—Ocean Avenue—The caller reported a man stumbling and possibly drunk or mentally ill. He was last seen hanging on to the rail almost at the end of the Seal Beach Pier. According to the log, as of 10:56 a.m., a cab was taking him back to Long Beach.

Possible Transient—10:10 p.m.—Pacific Coast Highway—The caller said a man holding a backpack in front of the location was harassing customers for money. Police unit 207 advised him to discontinue his behavior and he told police he would comply.

Grand Theft—6:33 p.m.—Ocean Avenue—A citizen reported the apparent theft of a kite board package from an unlocked vehicle. The lost property wa valued at $2,000. The crime apparently occurred on Saturday, Sept. 17, between 5 and 5:30 p.m.

Disturbance, Noise—3:42 a.m.— Pine Street—At least two individuals were making noise in the park. They kept coming close to the caller’s house and setting off the security lights.

Disturbance—1:58 p.m.—Katella Avenue—A man was yelling obscenities at the front of the building. The caller thought he might be a transient. Police contacted the man and the matter was resolved.

Keeping the Peace—11:38 a.m.—Paseo Bonita—The caller complained that a lawn service that was blowing dirt on the caller’s property. The caller said he tired to speak with the man responsible, who reportedly åbecame disturbed. Officers contacted the man, who said he was doing everything he can to keep dust down, even spraying water on the yard. He said due to the caller being a disturbance he said he will no longer maintain the yard at the residence.

Drunk—7:42 p.m.— Katella Avenue—A resident was reportedly screaming out his front door. He was counseled and went back into his room.

Suspicious Person or Circumstances—11:31 a.m.—Yellowtail Drive—The caller said two women were walking on the street,  one on each side, but only going to certain homes. The caller reported being concerned because they were not carrying any flyers. One woman was described as white, the other as Asian in her 20s with dark hair.

Suspicious Person in Vehicle—3:50 p.m.—Rowena Drive—The caller reported three men in a large white van driving around 12 minutes earlier. The caller said one man got out of the van and drank water from a hose, then left.

Suspicious Person in Vehicle—7:55 p.m.—Yellowtail Drive—The caller requested a patrol check for a gold colored four-door vehicle possibly occupied by a man. The caller said the vehicle was unknown to the area and might be casing the neighborhood.

Unknown Trouble—2:05 a.m.—Martha Ann Drive—The caller heard foot steps at her front door and when she looked, she saw someone running.

Suspicious Person or Circumstances—12:19 p.m.—Mainway Drive—The caller said someone tried to open her front door. Heard only. The caller requested patrol checks of the area.

Suspicious Person or Circumstances—6:50 p.m.—Martha Ann Drive. Read—The caller requested a patrol check for two men climbing on the roof of a residents near Martha Ann and Shakespeare.

There was apparently a third person out front who appeared to be acting as a lookout. The log did not include a physical description of the three suspects.

Suspicious Person or Circumstances—8:42 a.m.—Donnie Ann Road and Wallingsford Road. Read—The caller requested a patrol check for a transient pushing a grocery cart. The caller was worried because of recent break-ins.