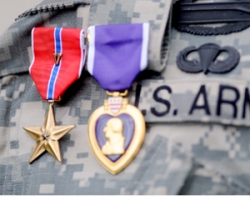 A Veterans Day Ceremony will be held at 11 a.m. on Thursday, Nov. 11, at Eisenhower Park on Ocean Avenue near the Seal Beach Pier.

It will include The Seal Beach Veterans of Foreign Wars Post 4048, and the American Legion Post 857. They will conduct the ceremonies:

The Program will include:

An Introduction of the Master of Ceremonies,

The Presentation of Colors by the Color Guard.

The Pledge of Allegiance

The Opening Address by one of the Post Commanders.

After the brief POW/MIA service will be the Laying of the Wreath followed by a bugler’s playing of Taps.

There will be a few guest speakers with relatively short speeches. Everyone has been asked to limit their speech to 5-6 minutes.

We Retire the Colors.

The public is invited to celebrate the 92nd Anniversary of the signing of the Armistice at the end of World War I.

Author’s note: (My Dad and Uncle Tom were in that war as two of the Polar Bears who fought in Northern Russia at 60 degrees below zero even eight months after the war ended.)