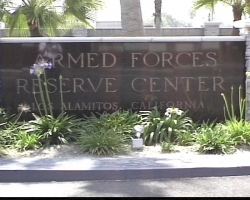 An unidentified woman has attempted to take her own life at the Joint Forces Training base in Los Alamitos. According to Public Affairs spokesman, Col. Rick Lalor, the incident occurred late Friday morning.

The woman apparently entered the base calmly, using her identification, and once inside, pulled a knife and began “harming herself” and taking “some pills.”

Lalor emphasized that the woman “had no beef” with the United States or its military, but felt the base was a “a safe place” to carry out the attack on herself.

The attack occurred at the JFTB main gate, he said.

The Los Alamitos Police Department is investigating, said Lalor. The Sun has attempted to get further details and a full report will be included in this week’s Sun.