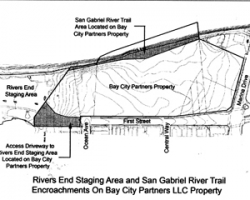 The court battle between the city of Seal Beach and Bay City Partners, LLC, owners of the property known as the “DWP site” continues.

Currently at issue is about a one-half acre portion of the property owners’ land that is commonly used as access to the Rivers End Restaurant and the staging area for wind and kite surfers near the San Gabriel River, as well as access to the city’s sewer system west of First Street.

The city wants the land, it says, to ensure continued access. It has been pursuing taking the land through the process known as eminent domain, in which city governments can condemn and take private property for the common good of all of its citizens.

While the process is highly controversial, it does demand that the city pay the property owner “fair market value” for the property.

And there’s the rub.

To pay fair market value, there needs to be a financial appraisal of the property.

However, both sides have provided drastically different appraisals. The city of Seal Beach, which at first tried to condemn the land for $48,000, has submitted a new appraisal of $120,545.

The property owners’ appraisal for the same land came in at $5 million.

“The difference is that our appraiser considered the comparable land values of adjacent oceanfront properties,” said Edward Selich, project development manager for Bay City Partners. “The city’s appraiser used comparable sales mainly of environmentally restricted open space lands. The difference here is in the philosophy of the city zoning non environmentally sensitive land for open space to keep its value down (which is considered regulatory taking) or our philosophy that the city can have it for open space but has to compensate the land owner a fair value for it. Absent a settlement in the next 89 days I guess a jury will determine which way is fair.”

Opponents of the property owners’ current proposed project accuse Bay City Partners of holding the access road hostage to get its plan approved.

Bay City Partners says it is merely trying to protect its property rights and has required the city to pay a license fee to use the access road until the court settles the eminent domain matter.

The trial for the valuation determination is set for March 28, 2011. At that time a jury will decide the correct value of the land.

Meanwhile, the costs to the city and the property owner have each allegedly run over a half million dollars. Whoever loses the court battle could have to pay the winner’s court costs to decide the matter.

The Sun Newspaper is seeking local residents, sun readers and government officials’ input on this issue and the ultimate question of what if anything will be built on the DWP property. Send your comments and contact information by e-mail to dennis@sunnews.org.