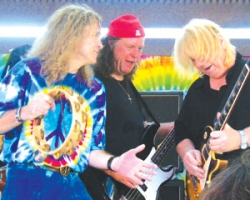 “These two lovely people came to our concert in 2007 and they met and now they have a beautiful baby and will soon become officially married,” said Barbara D’Angelo, who with her partner Shawn Kelly has promoted the music festival for the past six years to raise money for the Sunset Beach Community Ass-ociation and its home-grown charity projects.

In the past, festival funds have been donated for building a bathroom onto the Sunset Beach Community Association lot, where friends gather for neighborhood events such as their pancake breakfast, art festival and last Saturday’s Chili Cookoff.

“It is nice to see something wonderful come out of the concerts,” D’Angelo said. “We are hoping to see it also raise more money for the community this year.”

Kelly is the manager of Harpoon Harry’s in Sunset Beach and also is the lead singer for the Led ZepLand, the tribute band based on the legendary rock band Led Zeppelin. The band has donated its services to the festival for the past six years.

“I do it because I love the Sunset Beach community and I have made a lot of friends here and the community has been good to me at Harpoon Harry’s and with the concerts and I just felt it’s important to give something back,” Kelly said.

D’Angelo said this year’s net profits from the Rock and Beach Festival are earmarked to be used by the Sunset Beach Community Association to help offset the costs of remodeling the firehouse that sits next to the community lot. The association purchased the building from the Orange County Fire Authority for about $200,000. It formerly housed the Sunset Beach Volunteer Fire Department’s equipment.

However, with the annexation of the small beachfront community of Sunset Beach by Huntington Beach looming as a near certainty, Sunset residents wanted to keep the firehouse as private property of the community association. Its members said they wanted the facility to hold functions that would not necessarily need the sanction of Huntington Beach officials.

Led Zepland will headline the 6th Annual Classic Rock Beach Fest. It will be held from 1 to 4 p.m. in the Sunset Beach Community Lot at 12th Street and North Pacific Avenue in Sunset Beach.

“It’s the ideal band for this type of event because the music of Led Zeppelin is enjoyed by people of all ages,” D’Angelo said. “At a Zepland show I see people older than me enjoying the band who remember the songs from when they came out and I see a younger generation who is just discovering the music of Led Zeppelin and is excited to see it performed live,” DíAngelo said.

It doesn’t hurt the concert’s bottom line that once Kelly takes the stage with his long blond hair and the band backing him up, he seems to channel Led Zeppelin’s Robert Plant’s personality and unusual voice.

Community Association President Mike Van Voorhis  said: “The community raised enough money to buy the fire station after it went up for sale because we had always had lots of Sunset Beach events in the building—it’s always been one of the jewels of our community and we didn’t want to lose it to a developer. Now that the community owns the building, renovations and upkeep need to be addressed.”

The local band Phunkle will also donate its time for the second year in a row, sharing the stage with Led Zepland.

Phunkle is comprised of brothers Louie and Alex Carrasco with drummer Dave Tabone.

Robert Plant sound-alike Shawn Kelly is at the front of Led Zepland, which also includes Gary Lohre on lead guitar, John Baxter on keys and bass, and Scott Reeder behind the drum set. Dan Sharp will mix the sound.

Where: 12th Street and North Pacific Avenue, Sunset Beach, CA. 90742 (in the Community Center next to the Fire Station)