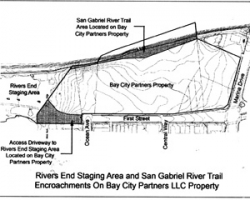 A group opposed to development plans for the Bay City Partners’ property in Seal Beach have hired a public interest law firm.

In a letter to the city, the public interest law group accuses the city of being committed to the Bay City Partners’ plan for the site that used to belong the Los Angeles Department of Water and Power.

The city is preparing a response to the letter that will be part of the final Environmental Impact Report for the property.

The group is known only as Seal Beach for Open Space. Its membership is unknown. There is no trace of any such group on Google, Yahoo or Facebook.

However, the law firm Chatten-Brown & Carstens sent a letter on behalf of the group to Seal Beach Director of Development Services Mark Persico on Jan. 9.

The subject: the proposed specific plan amendment, which attorney Amy Minteer referred to as “the project” throughout the letter.

“Of major concern to SBOS is the Project’s massive revision of the existing DWP Specific Plan, requiring an amendment of the General Plan and rezoning of the Project site,” Minteer wrote.

According to the Mintneer letter, the city of Seal Beach is “improprerly precommitted to the residential project.”

“The city has improperly committed to the land use and zoning designations for the site from visitor serving commercial to residential prior to environmental review,” Minteer wrote.

She referred specifically to the settlement agreement with Bay City Partners that ended two lawsuits between the city and the property owners.

Levitt said the city promised nothing to Bay City Partners. The $900,000 settlement guaranteed the city’s access to the beach and to a sewer line.

“All we agreed to with that settlement is to process it,” Deaton said, apparently referring to the Bay City Partners’ request to amend the specific plan.

Development Director Persico told the Sun the city was preparing a response to the letter as part of the final Environmental Impact Report for the project. He had no further comment.

The law firm of Chatten-Brown & Carstens is a public interest firm that handles land and environmental matters.

The letter to Persico was apparently hand-delivered to the Sun by an unknown person in an envelope without a return address on it.