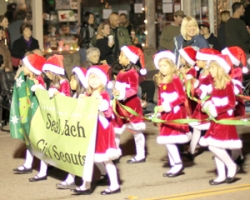 There will be shouts, but very few pouts and just as in baseball, there should be no crying during parade night in Seal Beach this week.

“This is the largest parade in Seal Beach Christmas Parade history,” said an excited Scott Newton, parade chairman. “We will have about 3,537 participants in 100 entries.”

Thanks to Newton’s leadership in the Seal Beach Lions Club and networking with other community groups, including the city and the Seal Beach Chamber of Commerce, the parade’s co-sponsors, there will be more than 100 volunteers from the Lions and friends that will help with coordinating the parade, the announcers, the crowd and the 108 vehicles and parade floats that are expected.

Thanks in part to the expanded parade route over the past couple of years, the parade has been able to grow well beyond what its original organizers may have expected. The Seal Beach Christmas Parade has become a happening, not just for the local folk, but has become a staple of the holiday season’s events for many people throughout Orange County.

Local realtor Jim Klisanin remembers the early days of the parade better than most in the seaside city. He spent about 29 of the event’s lifespan overseeing its coordination.

“It’s always been great fun,” Klisanin said. “I’ve participated in every parade from its first days. I remember the first one in which I pulled my daughter Shana when she was 4 years old in a little red wagon.”

Klisanin described how small the parade was in its early days.

“We used to go up Main Street and then back down because we had so few entries in the beginning,” he said.

Klisanin said his involvement with the parade had a somewhat inauspicious start.

“One day, the president of the Seal Beach Chamber of Commerce popped into my office and asked me if I could help out with the parade,” Klisanin said. “I told him I was too busy teaching school and trying to start a real estate business. He told me that was why he wanted me, because if you want something done you ask a busy man.

Klisanin said he would try it one year.

“I ended up doing it for 29 years,” he said. “I had a lot of help, especially toward the end when people like Scott Newton stepped in and are now still doing most of the work of putting it together.”

As he turned the reins of the parade leadership over to other people and volunteers, Klisanin was chosen one year to be the parade’s grand marshal. He has continued to be involved on parade night by presenting a pre-parade party. It has become so popular over the last few years that he has now had to limit it to attendance by invitation.

One longtime volunteer that continues to be an integral part of the parade is Rick Paap. This will be Paap’s 23rd year as an announcer for the parade. Although three other announcers will join him this year, including Vince Bodiford, Jo Dawson and Scott Durzo, for many years, Paap was the only voice during the parade.

Paap said he still looks forward to the event that kicks off the holiday spirit in Seal Beach and beyond in a style that harkens to a simpler time of life and promotes the idea of Old Town Seal Beach as “Mayberry by the Sea.”

“I think the year was 1988 and Hugh Cherry, who was a country and western music disc jockey, had been the announcer up until that point,” Paap said. “He asked me if I would help co-host one year and I said that ‘I’d love to.’”

Paap said that Cherry told him afterward that he was getting tired and asked if I would take it over when he retired from it. “I told him I would be honored,” Paap said. “We probably had between 70 to 75 entries at the time. We now have well over 100. It’s an amazing event. I’m still tickled every time I’m asked to announce at the parade and of course I will continue it as long as I can.”

Paap said other unsung heroes of the parade are the members of the SBTV-3, the local public access stations crew that has been coming out and videotaping the parade for future cablecast throughout the holiday season.

Lest the job become too much as the parade has grown, Paap said he is thankful for the addition of the three other announcers.

“It’s a great concept and I really think it’s best for the event,” he said. “The announcers help keep the parade flowing along and entertaining to the crowd.”

The parade has had a few standout entries through the years.

This year, according to Parade Coordinator Newton, returning crowd favorites include: The Robby Armstrong Band, the Black Diamond Drill Team and Drum Squad and the Hui ’O Hula from Leisure World.

“And of course, all of the kids in their various programs,” Newton said.

One person who will be missed in this year’s parade is Michael Brief. Since 1980, Brief led the perennial parade’s comic relief entry, “The Almost Famous Seal Beach Kazoo Marching Society Band.”

Brief died last year, much to the sadness of his friends, family and fans. However, his son Garrett Brief will pick up the baton, wear the white shorts and humorous long-tail tuxedo jacket and lead the band.

According to Newton, Eaker, a past Seal Beach Chamber of Commerce president, was chosen for his “relentless involvement in Seal Beach to make it a better place to live, work and play.”

Eaker will be riding in one of the most spectacular entries, a 2013 Rolls Royce Drophead Coupe.

Eaker remains the Chamber’s chairman of governmental affairs, an executive board member of Run Seal Beach and a Seal Beach Lion. He also owns Black marble Consulting LLC and Oceanus Life Management, both of which help companies and individuals with strategy and planning for greater success.

“Seth has become known as the voice of Seal Beach at many events including the Tree Lighting, the Christmas Parade, Run Seal Beach and is a frequent contributor at (Seal Beach) city council and planning commission meetings,” Newton said.

Newton touted the 20 or so new entries that he said are sure to be crowd pleasers.

He said some interesting ones include:

Some interesting ones include:

The Seal Beach Christmas Parade coordinators said they hope they have incorporated something for everyone into this year’s event and that it helps spread the good cheer of the holiday season.