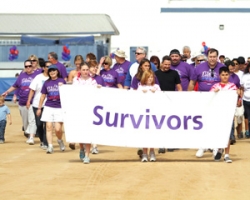 The 7th annual Los Alamitos/Rossmoor/Seal Beach Relay For Life raised more than $57,000 this weekend for the American Cancer Society, with the fundraising total on the rise as online donations continue to be collected. Since their first Relay in 2005, together these communities have now raised over half a million dollars for the fight against cancer.

This year, more than 500 participants on 36 teams took turns walking or running laps during the 24-hour relay at Los Alamitos High School that began Saturday morning, July 16. The Relay was kicked off by an inspiring speech from 2-year cancer survivor Karen Barnes, followed by over 70 survivors with their caregivers leading the first lap.

Eight teams each raised more than $2,500, with top fundraising teams, Cancer Insomniacs and Cancer Kickers, each raising over $5,000. Top fundraising individuals, Cassandra Phelps, team captain of The Dream Team, and Laurie Schiada, team captain of Karen’s Crew, each raising over $1,200. Donations are still being collected through August 31 at www.RelayForLife.org/LosAlamitosSealBeachCa.