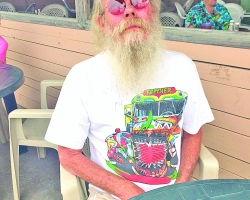 It was the summer of 1967.  Later, historians would refer to it as the “Summer of Love” but, at the time, it was a summer filled with promise and hope – and hippies looking for a better world.

A young man from Phoenix, Arthur Liles, spent the summer of 1967 in Seal Beach.  He and his high school girlfriend, Janice Cunningham, lived in an apartment on 13th Street with Jan’s sister and another friend.  Jan and Arthur had bonded in high school because they were both hippies, and their friendship blossomed into a romance when they ended up in our idyllic beach town.

Jan and Arthur both had jobs.  After work, they would walk out on the pier.  On Sundays, they went to the beach.  Life was good.

But Arthur got into some trouble with marijuana and found himself before a judge who wanted to sentence him to five years in prison.  His only alternative, the judge admonished, would be to join the Army.  He took that alternative and was sent to Vietnam.

Jan wrote him faithfully, sending scented letters the other soldiers could smell.  The letters traveled across the world, but they still smelled when he received them.  Arthur remembers getting the letters like it was yesterday.  They sustained him through difficult times.

When Arthur returned from Vietnam, he was a different person.  “I wasn’t right in the head,” he said.  He restrained himself from contacting Jan, he said, “because it wouldn’t have been fair to her.”

Arthur moved back to Phoenix and walked onto a construction site and asked for a job.  That job became his trade.  He never saw, or contacted Jan, again.

I first learned about Arthur from Laura Ellsworth, who is one of the people in charge of the Centennial Brick program. He heard about the bricks, and wanted to commemorate his time with the love of his life; Jan.  He bought one brick, and then another.  Eventually, he purchased eight bricks.

The first brick says “Jan, Joan, Sue, and Arthur.”  The next three spell out “I’ll see you in my dreams” across three bricks, all in capital letters.  The last four say “Sweet Jan. Oh, for another morning kiss – Arthur.”

He feels good that he can leave a lasting monument to the only woman he ever loved.  Even better is the fact the bricks will be placed at the Seal Beach Pier, a place that held a special meaning for the couple.

Ellsworth knew a bit of Arthur’s story as he kept ordering the bricks, revealing bits and pieces at a time about he and Jan.  At first, Ellsworth thought he might have married Jan.  When she learned this was a decades-old romance, she called the Sun and asked if we might be interested in the story.

Last week Arthur called to see if the Sun was interested in his story.  Reluctant at first, he agreed that people might be interested in his story of a lost love and the bricks he is buying to memorialize that relationship.  Rather than talk on the phone, he took a flight from Phoenix and we met at River’s End – outside.  He told me earlier he didn’t like to be inside, and after hearing a bit about his Vietnam tours it became understandable.

I knew from our brief telephone conversation that Arthur was old, and seemed uncomfortable on the phone.  When I met him in person, he was much younger than I imagined though.

Since I knew virtually nothing about Arthur, other than the fact that he bought a lot of bricks for an old girlfriend, we started at the beginning: 1966.  That’s when Jan and Arthur began to hang out as friends.  Arthur said he would be in Shop Class first period and Jan and her sister would drive past the classroom door in their black VW Bug honking and waving.

“Jan was the girl that all the fancy chicks hated because their boyfriends lusted after her,” Arthur said.

He haltingly told me his story, in bits and pieces.  I found myself saying, “And then what happened?” more than once.  His words were measured and I found myself noting that this guy wasn’t much of a talker.  But I could see, through his rose-colored sunglasses, that his eyes brightened when he talked about the good times with Jan.

What happened to Jan?

Arthur said he finally got someone to search for Jan, just last year.  “She died,” he told me, folding his arms across his chest.  “SHE DIED?” I asked incredulously.  That’s it? The end of the story?  I asked what her obituary said.  Arthur told me that there was no obituary, and that when he dies, there will be no obituary for him, either.  “Not everyone has an obituary, you know.”

I confess I was hoping for a fairytale ending; a feel-good last act that had Jan and Arthur together in their old age, reminiscing about the Summer of Love in Seal Beach.  After all, aren’t we all searching for a happy ending?

The bricks commemorating Jan may not fall under the “Happy Ending” category, but for Arthur, it will have to do.