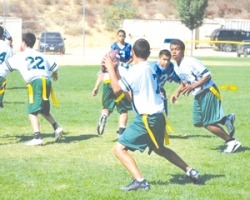 More than 125 student-athletes from St. Hedwig School  were recognized at their 48th Annual Athletic Awards held on April 7.

Highlights of the year included five of the eight teams winning First Place  in League and three of the teams capturing 10 tournament Championships.

Boys  Football will start next season on a 50 game winning streak.  The  school’s athletic program consists of eight sport teams, including Boys  Football,

Girls Volleyball, Boys and Girls Basketball, and two Cheerleading  squads. The inter-school athletic program is open to all students in grades  5 through 8.