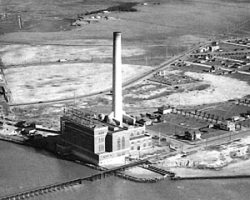 The Seal Beach City Council approved an amendment to expand the scope of the environmental impact report for the Bay City Partners’ property during its meeting on Monday, Sept. 12. It would include an analysis of possible soil contamination.

The city has already hired RFB Consulting to prepare an environmental impact report on the proposed site of the Bay City Partners’ development.

RFB asked to have Dudek, the firm that worked for the city on the ARCO gas station decontamination project, look at Bay City’s property on the former site of a Los Angteles Department of Water and power plant near First Street and Marina Drive.

Miller called for a more thorough study than the one proposed, citing his concern about possible asbestos contamination on the property.

The amendment was originally a Consent Calendar item, but was removed for discussion at the request of Councilman Miller.

Miller said he thought the proposal would not go deep enough into the soil at the property.

Barrow said Dudek found that, based on two prior studies, the results indicated appropriate levels of sampling at the project site.

Councilman Miller was convinced there was still contamination on the site.

Public Works Director Sean Crumby said Dudek had enough information from past studies to move forward with the proposal.

Miller said the site needed a more thorough study, not just a surface report working off a 2000 study. Miller said there had been grading performed on the site that had moved dirt around.

Persico said there had not been mass grading on the property since 2000.

Persico said the Orange County Health Care Agency had issued a clearance letter for the property in 1987.

Persico said the 2000 report found asbestos on the site was “background asbestos” and not site-related.

Miller said he was not aware of the contamination until he received a copy of a report from a member of the public.

Miller wasn’t the only person to raise the issue of asbestos at the meeting.During the public comment segment of the meeting, former council member Charles Antos said he had documents from the Los Angeles City Attorney’s Office concerning the so-called DWP property. He said the 400-page document said the property was contaminated with arsenic and asbestos.

“We’re picking up some of this property for a public park,” Antos said.

Persico said if the study brings up anything, that would play into the decision making process.