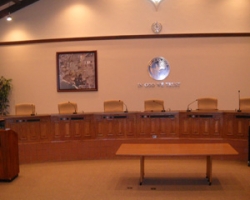 Seal Beach residents angrily criticized the settlement between the city of Seal Beach and the owners of the DWP property at the Monday, April 25 City Council meeting. The settlement, which ended lawsuits filed by the city against Bay City Partners and by the property owners against Seal Beach, included a $900,000 payment to the business enterprise.

City Council members defended their decision to settle the litigation.

Reading from a prepared statement, Carla Watson said the original consensus for the property was for two-thirds of the land to be park land.

The city argued that it needed to acquire the property through eminent domain in order to have access to a sewer line.

“These developers do not deserve excessive profits,” Watson said.

She said they blighted the property by building a “spite fence” around the site.

Watson encouraged residents to learn why most of the land is in public domain.

Watson said it was “unpatriotic” of Bay City Partners to sue the city for what she called their personal gain.

Resident Jim Caviolla also criticized the settlement. “We have no leadership,” he said. “Were you in the room?”

He said the council agreed to a zoning change to the property without public involvement. “Why didn’t we get a trial?” he asked.

Caviolla said the council members had basically agreed in the settlement to vote to change the zoning on the property that once belonged to the Los Angeles Department of Water and Power.

Mario Voce, a member of the Environmental Quality Control Board, suggested removing the DWP property from the jurisdiction of the redevelopment agency.

However, council members defended their decision to settle litigation between the city and the business entity. Mayor Michael Levitt said the agreement requires the property owners to go through the process.

He said the city promised nothing to Bay City Partners. The $900,000 settlement guaranteed the city’s access to the beach and to the sewer line.

Levitt’s remarks didn’t appear to persuade angry residents. “It’s my opinion that this could be considered an illegal contract,” said activist Michael Buhbe.

Antos said the agreement was made after he left office and he was not to blame.

He said the settlement called for the city to be a co-applicant with the developer to the California Coastal Commission. Antos said that was illegal.

“It’s now in the public process,” she said. Deaton pointed out that development plans for the DWP property would have to go before the DWP committee, the Environmental Quality Control Board, the Parks and Recreation Commission, the Planning Commission and the City Council.

“All we agreed to with that settlement is to process it,” Deaton said.

Councilman Gordon Shanks said eminent domain issues could not be discussed in public.  Shanks said the council was not happy with the settlement, but something had to be done. “I will still stand by it,” he said.

Resident Mark Loopesko and Deaton both asked for a agenda item at a future council meeting to discuss the settlement agreement.

• Last week, the Sun reported that Los Alamitos officials had proposed merging their police department with the Cypress and Seal Beach departments.

Seal Beach apparently won’t participate in such a merger.

Ingram notified the public that a meeting had been held earlier that day with representatives of the three cities. She said Seal Beach strongly desired to have local agencies remain with the city.

“I would have simply said we’re not going to join with those two cities,” Levitt said.

• The council passed on second and final reading a noise ordinance that specifically addresses barking dogs. The ordinance requires two complaints to initiate an investigation by Long Beach Animal Care Services, which provides animal control services to Seal Beach. The first incident would result in either a warning with no fine or a fine of $100.

• The council received an update on electric car charging stations. Director of Public Works Sean Crumby said the stations were already in the city, ready to be installed. Crumby said the city would charge $2.42 per two-hour session for owners of electric cars to recharge their vehicles in Seal Beach. That charge does not include the cost of electricity. California law does not allow anyone to resell electricity. Crumby said Seal Beach would be paying for the electricity to be used. Councilman Gary Miller said the city should send a letter to state agencies to point out that Seal Beach is getting the electric bill.