The Seal Beach Founders Day celebration will be held from 12:30 to 2:30 p.m. on Sunday at the Seal Beach pier. It will honor the city’s 97th anniversary of incorporation.

The event is also a salute to the “Hometown Heroes” who currently serve or have been stationed at the Naval Weapons Station Seal Beach.  The Naval Weapons Station has been a part of the city since 1944 and its detachments provide shore-based infrastructure support to the Navy’s ordnance mission and other fleet and fleet support activities.

Entertainment on Sunday for the Founders Day event will include patriotic music provided by Hank Barto Quartet from Leisure World and also:

The Seal Beach Battalion of the U. S. Naval Sea Cadet Corps will present the colors.

The 97th Seal Beach Founders Day Celebration is proud to honor all of the men and women who have been our good neighbors for so many years.

For more information, visit the Seal Beach Founders Day blog for updates and history of the Naval Weapons Station Seal Beach at sbfoundersday.wordpress.com.

As the city nears its centennial celebration, the local public access TV station, SBTV-3, has announced that historical interview for “Life and Times in Seal Beach.” It has been produced and is airing just in time for this years’ Founder’s Day celebrations.

The program features Douglas and Stewart Lawhead and is hosted by Terri Quinlan.  Reflecting on what it was like growing up in Seal Beach from the late 1920s, the one-hour interview provides more insight and photographs on Seal Beach history.  Sharp-minded at age 93 and 91 respectively, the Lawhead brothers remember it well.

“We are so glad to preserve Seal Beach History through real stories told by real people,” said Fort-Lincke.  These good-old-boys where young boys when the Derby Roller Coaster was running strong.  They not only rode it, they played on the abandoned structure after it closed down.

For more about Douglas and Stewart Lawhead, and their life in Seal Beach including memories about Anaheim Landing, Seal Beach Grammar School, the Earthquake, Long Board Surfing, and some proud military history, be sure to watch the “Life and Times in Seal Beach: The Lawhead Brothers” which will air throughout the month of October. The historical series, an all-volunteer production, featured previous interviews with Joyce Ekbert and Virginia Haley.

For the weekly SBTV-3 schedule, click “Programming” at www.sbtv3.org or look for the “SBTV Cable Schedule” in the Sun. 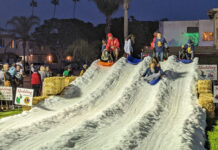