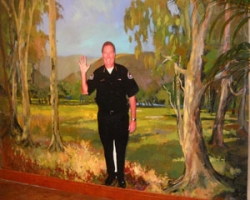 The party, which included a fair number of affectionate jokes at the chief’s expense, commemorated the conclusion of Kirkpatrick’s 34-year career in law enforcement. He spent six of those years as chief of the Seal Beach Police Department.

Kirkpatrick waved at his granddaughter Abigail throughout the ceremony as he stood near the podium and received presentations and gifts from various officials. He was not allowed to speak until the end of the event.

“You only get one shot at the microphone,” Sgt. Ron LaVelle told the chief. “We all know what will happen.” The last comment was apparently a reference to Kirkpatrick’s reputation for giving long speeches. Later, LaVelle said Kirkpatrick’s undercover name was “Phil Abuster.”

LaVelle said that when Seal Beach officers learned then-Capt. Kirkpatrick was coming to join the Seal Beach force, they were concerned because “Star Trek” fans are not famous for their sense of humor.

Following a video presentation of his life story, Kirkpatrick wiped tears from his eyes before taking his place at the microphone.

He asked the present and former members of the SBPD to stand up and take a bow.