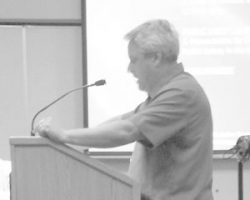 The workshop was apparently the fourth one called by the Rossmoor Community Services District board in response to complaints from residents.

Shawn Wilson was one of 20 or more people who attended the event. Wilson spoke about multiple burglaries of his Rossmoor home.

He said two out of three break-ins to his home resulted in the theft of three of his children’s bicycles.

He said the worst part about the break-ins was the lack of care on part of the Sheriff’s Department. After one break-in, Wilson called to report the incident. To his surprise, deputies arrived at his home two hours later to take his statement.

Soon after the break-in, Wilson followed up with the police station to see if there was any news on the burglary. The officer checked his computer and found no record of the incident.

“I am completely appalled with our police department,” said Wilson, apparently referring to police services provided to Rossmoor by the Orange County Sheriff’s Department.

The board acknowledged the rumors but did not comment on whether those rumors were accurate. The board agreed that if the Sunset unit were dropped, then the Rossmoor unit would have to have help from places as far as West Anaheim.

Mel Peterson, a resident of the community for 50 years, said Rossmoor is doing what it can with the services available, but he still believes the neighborhood would be better off with a well-kept homeowners association.

He said he believes that with a better homeowners association, the community would be better prepared for a power outage help or other emergency.

General Manager Henry Taboada said he agreed with many of the statements made by residents. Taboada said Rossmoor will just have to wait and see what happens.

“I feel that we have a cake in the oven and we don’t know when it will start burning,” said Taboada.

RCSD President Shannon Hough said: “We are a community and our voices will be heard.”