The Rossmoor Community celebrated the holidays on Saturday by lighting its Christmas tree, allowing children to have fun and dancing to Christmas music provided by the Bierman Brothers.

RCSD First Vice President Tony DeMarco acted as Master of Ceremonies for the brief presentations before the actual lighting of the Christmas tree. 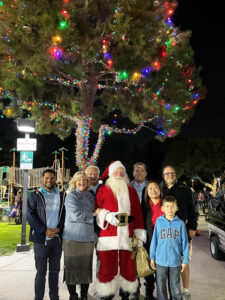 DeMarco thanked Jo Shade of the Rossmoor Homeowners Association for coordinating a cadre of local talent from My Art, Hopkinson Elementary, Lee Elementary, Polynesian Academy and others who provided a variety of song and dance performances.

Rips thanked directors Nathan Searles and Board President Jeffrey Barke, neither of whom were able to attend.

Rips thanked Foley for being a ‘generous’ sponsor of the event. “She has been a friend and advocate to Rossmoor in so many ways,” he said.

Foley, ironically, will begin representing a new OC Supervisory District that does not include January 8. Nevertheless, Foley said “I’ll always be around to help.”

Another of Foley’s accomplishments for Rossmoor was additional funding and other changes that provides for a brand-new street sweeping schedule for Rossmoor, fixing a problem that residents say has plagued the community “for decades.”

“For the past eight months, I have loved getting to know the RCSD representatives,” said Foley. “They work so hard for you. And your General Manger, Joe (Mendoza), he is amazing,” said Foley.

“What a great community (Rossmoor) you have here,” she said. She said all residents of Rossmoor at least 65-years-old would be eligible to receive a $200 gift card to “help you through the holidays.”

Foley said she is also conducting her 13th annual Coats for Kids drive to donate coats to the Boys and Girls Club of Orange County. 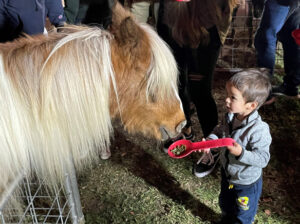 “And I will always be here to help if you need anything. My door is always open, and you can call and we’re here to serve. Thank you and have a wonderful holiday season and Merry Christmas,” said Foley.

“Happy holidays. Are you excited? I’m just so excited to be here tonight,” said Nguyen. “It’s so exciting to be here. And I want to make sure that you stay safe whether you’re staying in town, or you’re traveling,” said Nguyen wishing the community happy holidays.

“That’s big news if you live in Rossmoor,” said DeMarco, so thanks to our Supervisor (Foley) and Joe Mendoza, who had a big role, but we (RCSD) finally got it accomplished,” he said.

Elite Special Events kept the kids busy and the adults fed. The kids had a number of special attractions, including a petting zoo, a frozen snow sleigh ride, sitting on Santa’s life and much more. The many food trucks lined up on nearby streets and DeMarco thanked them for allowing them to do so.

Then they counted down the tree lighting and flipped the switch to light the three. “It works every time,” said DeMarco. “Happy Holidays Rossmoor,” he added, “now go have some fun.”

The Bierman Brothers, a popular local band, then serenaded the group with Christmas songs and other hits as the Rossmoor Winter Festival closed for 2021 and the holidays official were underway.