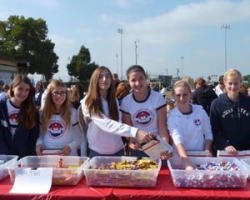 More than 400 mothers and daughters spent Saturday opening their hearts to soldiers at the Joint Forces Training Base and to those serving in Afghanistan.

The project was dubbed Operation Valentine, and was supported by the Orange County District of the National Charity League, which encompasses 13 chapters, including the group from the Seal Beach/Los Alamitos area.

The event was also supported by Chick-Fil-A restaurants, which provided more than 2,000 lunches, for the event. The participants served lunches to more than 500 armed services personnel who were training at the base on Saturday.

The packages include necessities such as socks, chapstick, sunscreen and snacks, as well as a hand-written and decorated Valentine Day card for the recipients. For members of the NCL, the day was just one of several opportunities throughout the year, when they give back to the community.

Many of the mothers in the chapter were introduced to the NCL by their mothers and now they are introducing their daughters to the organization. Seal Beach resident Joy Harn, current South Coast chapter president, said the girls learn to organize their chapter from the beginning. The girls are grouped by grade, from seventh to twelfth, with each grade managing itself.

“The girls will take on those leadership roles,” Harn said.

The six-year program allows young girls to grow into different roles and some will put in as many as 600 hours of volunteer service during the six years. The local NCL chapters work with groups such as We Care, Precious Life, Casa Youth Shelter, Cypress Boys and Girls Club and the Orangewood Children’s Home.

It can also be an eye-opening experience for some. During holiday seasons when the chapter is helping to fullfil the Christmas lists of less fortunate children, the girls are often surprised to see requests that are far from the newest toys or electronic gadgets. Instead lists often include necessities such as shoes or backpacks.

“They realize how fortunate they are,” Harn said.

From the start, the seventh grade girls are put in charge of their own groups and meetings.

They are entrusted with responsibility and allowed to grow into bigger roles. By the time they are 15 or 16, they are often running and organizing entire programs, South Coast past president and National District Coordinator Katie Davidson, of Seal Beach, said.

“Even the shyest of girls just blossom before your eyes,” Davidson said.

According to NCL literature, the organization currently has more than 48,000 members in 165 chapters in 17 states. In addition to philanthropic work the NCL also introduces girls to educational activities and cultural events. But Saturday was about sending out a Valentine Day hug to soldiers.