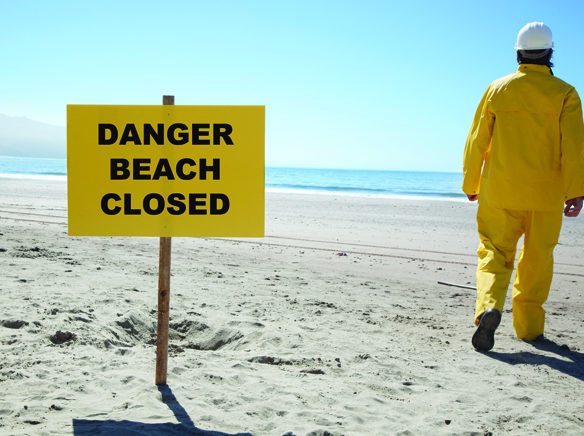 The good news—if that phrase may be applied to something as revolting as a multi-million gallon sewage spill—is that our town’s beaches reopened early Monday afternoon., Jan. 3. The spill originated inland and closed beaches in two counties.

State Sen. Tom Umberg told the Sun that the pipe that caused the spill had been scheduled to be replaced in 2022.

“We have an infrastructure crisis right now in California,” he said.

He also said the state has a budget surplus right now. According to Umberg, the sewage spill is an excellent example of putting money into infrastructure when you have it.

According to Umberg, the state Senate is looking to what they can do about preventing sewage spills.

On Monday, Seal Beach Marine Safety Chief Joe Bailey phoned the Sun around 1:32 p.m., and said the Lifeguards were taking down the closure signs as he spoke. About 20 minutes earlier, the Orange County Health Care Agency had contacted city officials with good news. “Apparently the tests came back clean,” Bailey said.

Bailey said the city normally advises the public not to swim in the ocean for 72 hours after a rain, because of the trash that comes down the river as a result. And Health Care Agency tests normally take 24 hours to come back.

“So this is great news for us,” Bailey said, referring to the reopening of the beaches.

Seal Beach residents initially got the word from a Seal Beach Police Department Nixle alert around 1:35 p.m., Friday, Dec. 31. “Seal Beach beaches are closed as a result of a sewage spill,” the message said.

According to the internet, it is a 15-minute trip from Carson to the Port of LA.

From Carson, the sewage flowed into the Dominguez Channel and then went into the river—making an unpleasant mess for beach communities in both LA and Orange counties.

During a Friday, Dec. 31, afternoon phone interview, Kalmick said that while people were not allowed in the water off Seal Beach, the public could go onto the sand. He said Lifeguards contacted about 20 people to get them out of the water.

The volume of the reported spill kept climbing as reports first came in. As of 2:18 p.m., last Friday, Supervisor Hahn’s office put its volume between 6 and 7 million gallons.

Fortunately, Seal Beach didn’t need authorization from the state government to close the beaches for the emergency. “So they don’t need the Coastal Commission’s authorization,” wrote Noaki Schwartz, public information officer for the CCC.

“These closures are done under the authority of the County Environmental/Public Health agency,” Schwartz wrote.

Sen. Umberg said there was a role for the Coastal Commission to play in preventing sewage spills. He said the question is, what role can they play in infrastructure repairs and replacement that doesn’t require years of permitting.

The California Water Resources Boards have a program to address sewage spills. “As far as preventing these spills, the Water Boards regulate the amount of waste that can be discharged, require permits that lists those standards, impose fines and other penalties when unauthorized discharges exceed those limits,” wrote  Ailene Voisin, public information officer for the Water Boards, in a Jan. 3 email.

What about financial assistance for cities affected by the spill?

“We had the Clean Beaches Initiative Grant Program for many years, but the funding for that program is essentially exhausted,” Voisin wrote.

The remaining funds were rolled into the Stormwater Grant Program.  You can find out more about the SWGP at Financial Assistance Programs – Grants and Loans – CLEAN BEACHES INITIATIVE GRANT PROGRAM | California State Water Resources Control Board,” Voisin wrote.

“The CBI program provided grants for projects that prevent spills, such as the incident in Orange Co., or projects that eliminate other sources of beach water pollution; CBI grants weren’t for responding to spills.  That would be the responsibility of the County or the party that caused the spill,” Voisin wrote.

“We do have Clean Water SRF funds that can fix sewer problems.  If the spill was the result if inadequate or structurally deficient sewer line that needed to be replaced or repaired, we could provide CWSRF loan funding.  If the spill was caused by inadequate cleaning that caused the line to backup, then that’s the sewer district’s responsibility,” Voisin wrote.