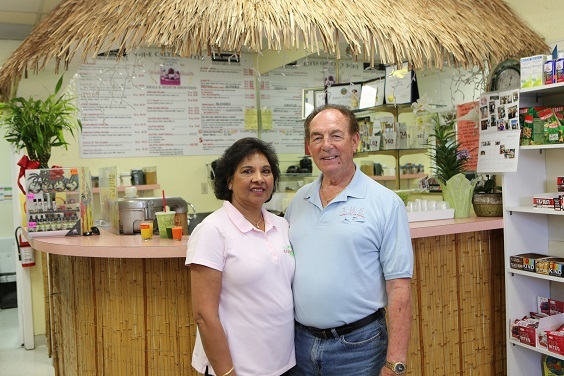 If there was ever a story emblematic of small business success, it could be the story of The Calypso Juice & Vitamin store at 330 Main Street in Seal Beach.

This Saturday, Tony and Habeeza Locke, the owners of Calypso Juice will celebrate their 25th anniversary in business with an open house from 11 a.m. until 2 p.m., but the story of how they met and the resulting life they’ve created is an inspirational story for our time.

They grew up half a world away from each other. Both left their homes thousands of miles apart in the 1960s to emigrate to America, never knowing what was waiting for them in the future. It was a leap of faith in a time when immigration was still a promise of a better life.

He was from London. She was from Trinidad. Tony had just been released form the British Army (teaching fitness to soldiers) and she was a student, dedicated enough to get a student VISA and a ticket to stay with her brother in New York.

Today, they are both U.S. citizens.

Tony, an engineer (and a health nut), went to work in Canada and waited for seven months to get a green card. As soon as he got the green card, Tony came straight to California to be near “the bodybuilders.” Habeeza lived in New York with her brother but transferred to school in Long Beach.

On December 14, 1991, their lives changed forever as the hands of fate brought them together for the first time at a Christmas Party, and fulfilling the promise of a better life in America. From the date of this Christmas Party so many years ago, Tony actually sends flowers to Habeza every MONTH on the 14th day to tell how much she means to him.

Their love story aside, Tony had a dream. Long before he met Habeeza, Tony wanted to transform his hobby of health into a business. “It was his dream, I’m just living it with him,” says Habeeza.  After they were married, they lived in Westminster. Locke says they decided to give it a go. They found a shop for rent on Main Street in Seal Beach (1992). They liked it and explained their idea for a health based store to the landlord. “He liked it too,” so they took a risk and contracted the space.

“We tore the place apart,” remembers Tony, and it was during the Seal Beach Car Show in 1993, The Calypso Juice & Vitamin Store opened its doors for the very first time. “We just wanted a little business,” said Habeeza.

Although Tony had studied the natural power of foods for years, Habeeza’a native Trinidad is well known for its incredible selection of fresh fruits and vegetables so she was a quick study. It was a rock star health team from the start.

“We did juice and vitamins in the beginning and there was nothing around like this,” says Tony. The secrets of healthy living is something “I wanted to pass along and allow our customers to experience fitness and a healthy lifestyle.”

Their first break came when Mark Haynes, a local teacher and coach, came in on their first day. He obviously had a good experience because he is still today one of their best customers.

Then there was the story of Josh Beasley. Josh ventured into Calypso Juice with multiple problems, including somewhat of a weight problem. “He could barely walk through the front door,” they remember, but Habeeza fixed him a special juice with vitamins, fruits and other nutrients. “Doctors said they didn’t know what was wrong with him,” they said.

Josh kept coming in and drinking the special drink.

The impact was so profound on his health, and his weight, people began asking him to “reveal his secret.” His success spread the word about their growing business and more loyal customers began coming in.

Even today, the “Josh” is one of the store’s more popular health drinks.

Then there was the story of the now retired CEO of SCAN. He walked in one day and said doctors could not cure a soreness in his throat. Again, Habeeza and Tony mixed a special concoction (oil of Oregano) and told him to apply it to his throat. Two days later, the condition was gone.

“We’ve tried to emphasize health and nuitrition over making money.  We were never in it to get rich but to help people get healthy,” the couple now say.  For many years, they even refused to take tips but now do so only to help their three employees, who split them.

Calypso Juice has somewhat taken advantage of a growing awareness of healthy living, yet the word of mouth has spread far and wide about their little store. In two and one-half decades, they’ve managed to beat back two major competitors, both of which are now out of business.

“Gradually, people have come to know us but every day, people come in and say they still didn’t know we were here,” said Tony. As they prepare to celebrate 25 years in business, Tony and Habeeza are amazed that many in the area still don’t know they exist.

They’ve expanded the menu to take advantage of the juice revolution and other healthy additives, but generally they are in the same business as when they began.

They stay in touch with the nuitrition network and always stay on the cutting edge of health, like offering wheatgrass and oil of oregano. What is wheatgrass, you may wonder? If you drink an ounce of wheat grass juice, you can, in an instant, receive the nuitritional value of 92 minerals and the equivalent nuitrition of two and one-half pounds of vegetables. Yes, wheatgrass.

Tony and Habeeza have witnessed the body’s incredible power to heal itself.  They are hoping even more customers will come by to visit them this weekend as they celebrate 25 years. Like most people, they use regular doctors too, and think “doctors have their place,” but so does natural healing.

They hope more people learn how to transform their bodies into self-healing cures by feeding it the vitamins and minerals necessary to fuel the process. The vitamins and nutrients “work synergistically to heal the body, says Tony.

“We have the experience others don’t have,” the couple emphasizes, as they regularly entertain customers lumbering into their 21st century saloon of health. Hebeeza keeps careful notes as they try to personally know every single customer. The loyalty is rewarding. They have legions of regular customers, some of whom “ride their bikes from Whittier” just to stock up on vitamins.

As a result, their customer base is now spread across California and growing. “We’ve got something special,” said Tony, and “we developed it for ourselves.” The couple is fiercely proud of having personally worked for everything they have achieved.

Though they began their individual journeys thousands of miles apart, life has brought them to a small storefront in Seal Beach where their everyday lives have redefined what success should truly be.

In a sense, the couple’s story and success gives hope not only to those seeking health, but also to those unsure if an American Dream is still a worthy pursuit.